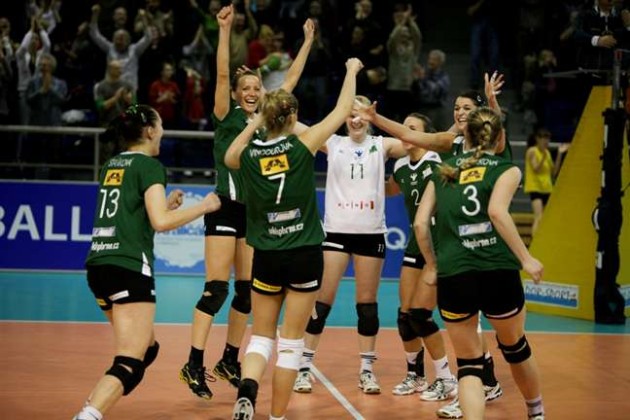 This is a real sensation and probably the greatest result for the Czech team in the European Cups in the past few years. “It is my greatest victory and I am very proud of my girls” stated head coach Ondrej Marek.

Lokomotiv is almost unanimously considered the strongest contender for the trophy in the CEV Volleyball Challenge Cup and had traveled to the Czech Republic without collecting that much information about Kralovo Pole.

“Their coach had stated they did not know anything about us. So finally they were well served” adds Marek. The guests from Azerbaijan were surprised after losing 30-28 the opening set and they drew level before the home side brought home also the third set.

“BRNO played better than we did and they deserved this win. They just delivered a great performance tonight” stated one of the many stars included in the roster of Lokomotiv, US American Nancy Metcalf.

Next week Kralovo Pole needs to win the return match in Azerbaijan or at least the golden set to make it to the semifinals. “We are under pressure now and I am waiting for a difficult game” added Metcalf. “We have to prepare very carefully and work hard to seize the night” she stated.

Local spiker Romana Stankova enjoyed the great atmosphere around the game, with more than 2’000 fans in attendance. “I have never played in front of so many people. I was just amazed by this atmosphere. The audience helped us a lot and I do not think we would have won if we had had 500 people in the hall”.