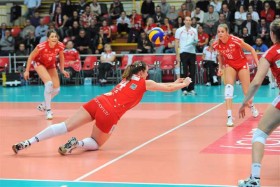 Some 2’300 fans were in attendance tonight at the “Palayamamay” and local head coach Carlo Parisi was greeted by a standing ovation to celebrate his recent appointment at the helm of the Czech national team. “We knew the quality of their play and especially of their opposite” he said after the game. “It was somehow a strange match and our opponents got back on track in set 4 also thanks to our own mistakes after we had just completed a great comeback. I have to praise all of my players because they were always very concentrated and did well especially in the deciding tie-break. Floortje Meijners played a good match especially by taking into account that she was added to the starting six at the very last moment as Francesca Marcon suffered a slight injury during the warm-up” he concluded.

The return game is scheduled for next Tuesday, February 28, in Germany.