After losing 1:3 this past Wednesday in the capital city of Tatarstan, Azerrail BAKU is intensively preparing for the second 1/4 final match with Russia’s Dinamo KAZAN scheduled for Tuesday at “Baku Sports Palace”. 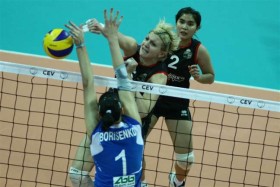 Azerrail goes for home revenge to make it to final four

This is the very last step before the top four teams in Europe make it to the deciding stage of the 2012 CEV Volleyball Champions League scheduled for next March 24-25 there in Baku.

“We will need to stay 100% concentrated in order to win the match and go for the golden set. They played well last week in Kazan but we also weren’t that bad” says the Italian-born middle blocker of Azerrail, Sara Anzanello (pictured). “We have to deliver a strong performance in all fundamentals if we want to make it to the final four. I believe we can edge Dinamo KAZAN even though they are the current leader of the Russian Superleague” she adds.

AUT: AVL Men and Women – Results and schedule of matches