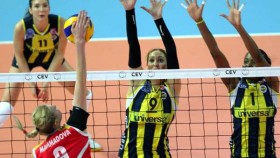 Fenerbahce of Ze Roberto beat again Rabita Baku and rushed to the Final Four in Baku . Fenerbahce  has crushed its opponents by dominating in all aspects. In particular, Korean Kim Yeon – Koung was excellent as an attacker, Logan Tom as an outside hitter and the libero Yeldan has played one of her best games in career making a major contribution to the fundamental second – line (39 effective receptions,79% positive and 54% perfect).

In Rabita the best in block and attack were Mammadova and Osmokrovic.

3. Set: This time Fenerbahce started well with Tom’s playing and reached the maximum benefit of 11:8. The only difficult moment of the match for Turkish team was when Rabita scored 6 points and Tom had difficulty blocking Golubovic, reaching the result of 11:14. With Sokolova‘s score from service (12:14) and with the point of Tom in block, Fenerbahce got to 3 break-points (2 in Kim’s counterattack) 15:14. With excellent performance of Sokolova and Kim in counterattack, Fenerbahce  closed the set with 25:20.