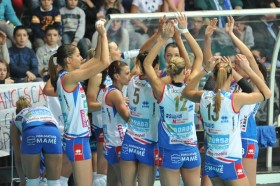 MC Carnaghi Villa Cortese will represent Italy in the women’s Final Four in the Champions League in Baku.
After 147 minutes of playing, the team of Marcello Abundance won in Golden Set with 15:11.
It is another great game to add to the history of the MC-Carnaghi Villa Cortese.

In the second set Villa Cortese had deficit in reception and in attack and dropped below 6:2. Marcellus went out and gave space to Lucia Bosetti. Thanks to her and Wilson, Villa Cortese evened the result 6:6 and then was unstoppable (10:17).
Lucia was excellent in service and Wilson in block and attack.

After  Bergamo equaled to 21:21, Villa Cortese won two set points. The error of Piccinini led to the result of 25:25. Finally, Pavan closed the set.

Villa Cortese intensified the game and exceeded Bergamo in the beggining of 3. set. Lindsey Berg did not have  support in receiption which the opponent took in its favor. Bergamo won the set with 25:18.

For Bergamo on the court together with Vasileva entered Lucia Bosetti instead of his sister Caterine.
Bergamo had good start (4:2) but the block of Wilson and Pavan evened the result (4:4). In the middle of the fourth set Villa Cortese took the advantage of the mistakes in attack of Vasileva Piccinini and took off with the ace of Lucia Bosetti (12:18). That benefit Villa Cortese did not waste and Pavan and Wilson won the tie break.

CEV: Italy and Bulgaria – signing of...