CEV JV: Ireland takes great strides on and off the court

The Republic of Ireland continued their improving performances at the 2012 CEV Junior Volleyball European Championship in Motherwell by taking part in a very entertaining game against much fancied Luxembourg. 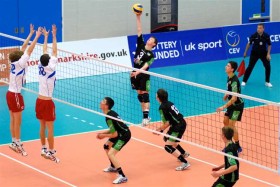 Ireland takes great strides on and off the court

The score line (25-11, 25-14, 25-11) did not reflect how close each set was, with the Irish showing amazing heart, fight and passion to keep the joint favorites on their toes. The boys in green earned the respect of their opponents as they worked together as a unit and fought for every ball. Coach Laurent Cauet said after the game: “This was our third match and we took another big step forward for a very promising junior national team”.

“We had a really good start to the first set which gave us confidence. We tried to keep things simple” he reflects. “The team now understands that they can have control of the game. It was good as we began to have control of the things that we wanted to do on court. The good thing is that we disrupt the game plan of our opposition with our unique style of play. We don’t allow a lot of fluidity to the game, and because we fight so hard on court and chase every ball we are very difficult to beat. In terms of management, it was important to think about pacing ourselves. Today was the third day of 5 consecutive match days and our bodies and minds can get tired. We had to rest a few players to stay competitive but we were very pleased that everyone who came on the court contributed positively to the team and added an extra dynamic. Our serve improved by a huge amount and we managed to even score 3 aces against players that are technically very good passers”.

Coach Cauet concludes: “We are all feeling very positive about this week. We are really impressed as to how the lads have developed and improved and they are really starting to become a national squad that the people of Ireland can be proud of. And while Ireland may have been beaten on the court, the competition on the bus which the two teams shared back from the venue was much closer. Both teams engaged in a sing off which was as entertaining and good natured as the match they had just finished”.