Cyprus brought the heat to Scotland’s hopes in the 2012 CEV Junior Volleyball European Championship – Small Countries Division with a clear straight sets victory (25-16, 25-16, 25-13) to lead the final pool in Motherwell. 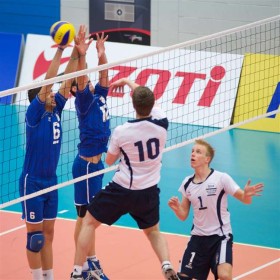 The previously unbeaten Scots were put to the sword as Cyprus raced to an 8:1 lead at the first break and were unable to maintain any level of pressure on the Cypriots, for whom wing-spiker Giorgios Moschovakis was again the star man in attack, scoring 18 winners from 32 attempts, aided by ten service aces from the Cypriot team as a whole.

Coach Kostas Delikostas was delighted with the performance of his team, as he feared Scotland would pose a major threat to his side’s ambitions. Delikostas stated: “We were one level ahead of Scotland both technically and tactically today, and I felt our great start won us the game”.

Scotland counterpart Thomas Dowens felt his team had been too conservative but that the side could regroup for the matches to come. Dowens, coaching Scotland in their inaugural SCD Junior campaign, opined: “These are fantastic learning opportunities for the players to deal with the pressure of multi-day competitions, so we need to lose in order to be able to win in future”.

As the tournament moves into its latter stages, Cyprus appear to have done enough to have the inside line on victory, while the closing fixture, between Scotland and Luxembourg may well determine the silver medal position.

CEV JV: Ireland takes great strides on and off the court