The girls of Luxembourg edged Liechtenstein in straight sets (25-21, 25-22, and 25-12) on the opening day of the 2012 CEV Junior Volleyball European Championship – Small Countries Division on Friday afternoon in Limassol. 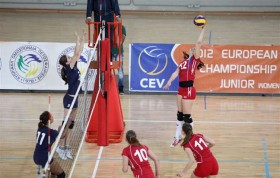 The Grand Duchy overwhelmed the Principality with efficient serving that put up the pressure during the first two sets and then left no doubt as to who was the boss in the third.

Led by Leah Dickhoff, whose 13 points earned her the distinction of top scorer of the match, Luxembourg scored 6 block points (to Liechtenstein’s 3) and added 28 kills (to 23) plus 16 aces (to 6).

“We studied our opponents very well after our defeat in January” said the head coach of team Luxembourg, Ranguel Krivov, after the match, referring to his team’s defeat in the hands of Liechtenstein in the qualification round held in the Faroe Islands earlier this year. “What’s more today our players followed our tactics to the letter and played very well for point after point”.

The opening day concludes Friday evening with the home team of Cyprus taking on Scotland at 19:00 local time (16:00 GMT).

RUS: Zenit KAZAN and Dinamo MOSCOW to battle for crown of Russian Superleague