RUS: Zenit KAZAN and Dinamo MOSCOW to battle for crown of Russian Superleague

Zenit KAZAN and Dinamo MOSCOW, i.e. the winners of this year’s CEV Volleyball Champions League and CEV Volleyball Cup, recently qualified for the Championship series of Russia’s Superleague for what sounds like an informal “European Supercup”. 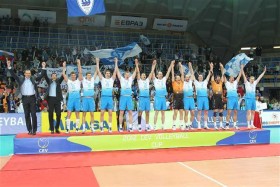 Dinamo MOSCOW finished yesterday the semifinal series with Iskra ODINTSOVO by scoring a 3:0 win to wrap it up 3-1 and go for a remake of last year’s finals with Zenit KAZAN.

The guys from Tatarstan have claimed Russia’s Superleague four times in the past five years and started their amazing winning streak back in 2007 as they edged Dinamo MOSCOW in the finals after five matches by the time Zenit was still playing under the denomination Dinamo-Tattransgaz and the group was mentored by Viktor Sidelnikov.

Last year the Championship series was ended by Zenit after four games with Vladimir Alekno going for his second consecutive crown at the helm of the group from Tatarstan.

Since this year the regular season of the national league was played with two geographically-based subdivisions Zenit and Dinamo still haven’t crossed their ways before the final series that will start this coming April 12 and 13 with two matches taking place in Kazan. Match 3 and 4 will follow in Russia’s capital city on April 17 and 18 while – if needed – the very last game of this great series is scheduled for April 21 in Tatarstan.