Skra Belchatow just won the silver medal in the Champions League and is fighting for Polish championship in semi-finals of PlusLiga, but it seems that sport battle is not the most difficult for them at all. Everything by Russian clubs which plan to compete for Polish stars of Skra 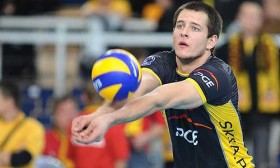 It is well known that the Russian league has the most money among the top leagues in Europe, but now they are beginning to use their fortune to bring the best players in the world. Having signed a contract with Juantorena, Zenit Kazan gave the first signal that Russia may dominate transfer market this season. All Russian teams would like to equal to Zenit, therefore, they will not save their money on strengthening.

Recently, it is said that best Russian teams are trying to seduce two leading players of Skra Belchatow. It is about Bartosz Kurek, who was selected by volleyball experts as one of the best wing-spikers of 2011. 23-year-old star of the Polish national team and PGE Skra Belchatow is one of the most coveted players in the Europe. However, it will be extremely difficult to “extricate” him from Poland. Kurek has played in Belchatow since 4 years and he has everything he need to be happy.

According to Przeglad Sportowy, Dynamo Moscow is the most determined to buy Kurek. Muscovites would have to propose about 500 thousand euro per season, but it is possible.

Russian clubs also see in their composition another wing-spiker of Skra Belchatow – Michal Winiarski. “He is known as a perfect defender, but also like great spiker and some people says that he is the most comprehensive in the world. Hence, Michal got few offers from Russia. Will he stay in Skra? I do not know. We have to wait several weeks and everything will be explained”- Ryszard Bosek Winiarski’s manager said.

Even if a few stars will leave Poland, you can expect contracting other great volleyball players. Delecta Bydgoszcz would like to transfer Milos Nikic from Paradiso Monza or Cuban Yosleyder Cala from Tours VB. Probably, Cala is not the only Tours’ player who move from France to Poland, because Raphael Redwitz gained offers from Poland, According to our information from Delecta Bydgoszcz and PGE Skra Belchatow. However, the champion of Poland also presented a proposition for Luciano De Cecco.

There is one brand new news. Daniel Plinski updated his contract with PGE Skra Belchatow and he will have been playing in Skra at least 2 next years.

ITA A1: Verona’s playoffs to begin Saturday at 6pm