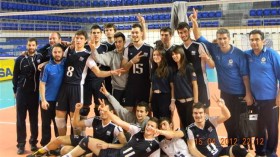 Greece had some problems only in the third set but finally got past its opponents to claim a ticket to the final round of the Championship that will be co-hosted in late August by Poland and Denmark.

Finland and Italy finished second and third respectively in the group, with the “Suomis” opening the program on Sunday by downing their neighbors from Sweden in straight sets (25-15, 25-17, and 25-16).

Finland controlled the game from the start up to the end displaying great blocks and a very solid service.

The same did Italy while playing the hosts of Montenegro, with the game finishing in another 3:0 (25-18, 25-21, and 25-21) and the young “Azzurri” having no major problems to master the actions displayed by the local heroes.