Hosts Turkey, Poland and Germany all began their CEV Women’s Continental Olympic Qualification Tournament campaigns with convincing wins over Bulgaria, the Netherlands and Croatia respectively on the first day of action in Ankara on Tuesday. 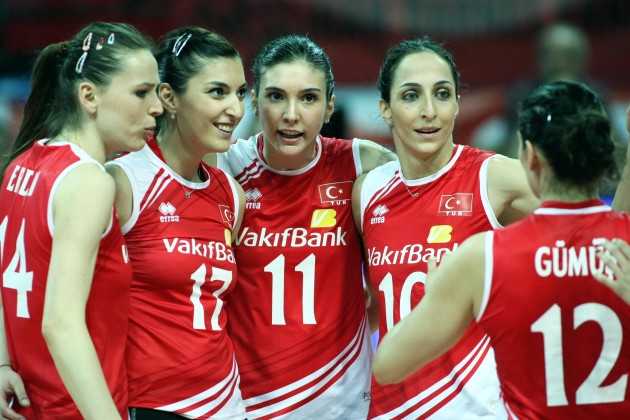 To no one’s surprise Esra Gümüs emerged as the game’s top scorer with 18 points.

Eva Yaneva, who was in role of an opposite for the first two sets, but then switched to the receiver position for the third, scored 10 points for Bulgaria.

“We had a bad start. We could not show our real performance,” said frustrated Bulgarian captain Strashimira Filipova.

“We made lots of mistakes and that is why we lost.”

“We are happy to begin with a clean-sweep victory,” Filipova’s Turkish counterpart Esra Gümüs said. “This is a good start and we are already looking forward to the next matches.”

Katarzyna Ewa Skowronska-Dolata led the scores with 19 points for the winning team. Anna Werblinska added another 16, impressing with eight kill blocks for Poland. Captain Manon Flier was the most prolific for the Netherlands with 11 points.

A disappointed Flier said her team could have done better. “In the third set we played better and did not give up,” she stressed. “But I don’t know why we could not play well in the fourth set. It was probably because of a lack in confidence.”

Polish captain Katarzyna Skorupa was happy to win the first game of the tournament: “It was only the first step and we want to be successful also in the next matches as well.”

Germany left no doubts about their ambition for a place at the London 2012 Olympic Games as the squad, mentored by Italian-born Giovanni Guidetti, hammered sealed a convincing straight-sets (25-12, 25-16, 25-17) win over a Croatian team handicapped by the absence of a number of key players.

Angelina Grün registered 10 points for the winners while Jelena Alajbeg picked up the same for Croatia.

“They were particularly good in defence while we made lots of mistakes and lost,” Croatia captain Mira Topic said.

“We are happy to start with a victory in a tournament that is so difficult for all teams,” Germany’s Margareta Kozuch added. “We are already looking forward to the next games.”

Day two will feature one match from Pool A, with hosts Turkey facing Croatia, while Russia and Serbia begin their campaigns in Pool B against Poland and the Netherlands respectively.

TUR: CEV and UEPS educational course gets underway in Ankara