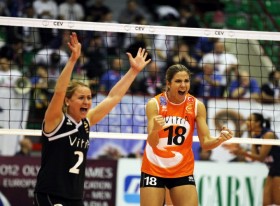 The Italian-born head coach of Eczacibasi, Lorenzo Micelli, says: “The first three rounds of play did cost much energy and we ended up by scoring two wins and suffering one defeat. Last week we did win after a breathtaking match in Italy; VILLA CORTESE is a strong and very good team. They have been pushing us until the end of the game and I am sure they will be showing the same spirit also here in Istanbul. We shall exploit our home advantage and score a second win”.

Eczacibasi is currently ranked second in Pool A with 5 points followed by VILLA CORTESE with 4; current leader RC CANNES of France (9 points with three wins in as many matches so far) plays SCHWERINER SC of Germany whose win/loss record stands at 0:3 for the moment.