Argentina: An outstanding performance of the national championship and the Argentine cups reaching every corner of the country

The year that is ending had grass-root competitions all over the country with the National Championships that gather the Province Teams and the Argentine Cups, with the participation of the best Club teams of each region. 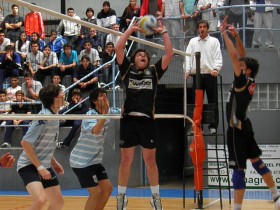 In some cases with some rest and in others with a competition next to the following, the U 14, U 16 and U 18 both genders athletes participated in tournaments in the whole country.

As usual, the National Championships started the season with the U 18 being the first one.

Entre Ríos, as in every season when the time comes to organize these championships organized the first one, with 10 boys teams in Chajarí and 9 girls ones in San José.

Then, San Juan welcomed in its main city both genders for the U 14 category with a total of 21 teams between both genders.

With the U 16 championships played in San Fernando del Valle de Catamarca in August, the boys tournament gathered 13 teams while the girls 16, all together making it 29 province teams.
This time, the winners represented two provinces, Cordoba defeated Metropolitan at the girls final and San Juan overcame Formosa in the boys.

With reference to the Argentine Cups, Mar del Plata started with the U 18 competition, assembling 44 teams (20 girls and 24 boys) against the 36 of the previous year in a tournament with outstanding organization.

The work done by the organizers received a great answer of all the participating teams.

But, with reference to organizing competitions, Entre Ríos did also an excellent job in its first Cup tournament.

The province welcomed the U 14 competition in Chajari for the boys and San Jose and Colón for the girls with 41 teams participating and with some teams showing their best output of all competitions.

The title was for Club de Amigos for the boys and 9 de Julio Freyre for the girls.

The last competition of the 2011 season brought the biggest participation: the U 16 category in Carlos Paz gathered 46 teams (24 for the girls and 21 for the boys).

Cordoba’s province city showed its best, adding fields to the once that participated at the 2010 competition (when it held the U 14 category) and managing very long hours competition to its utmost, even some days finishing at 3.00 on the following morning.

The local celebration with El Tala team winning the girls competition was the best with Obras de San Juan winning the boys.