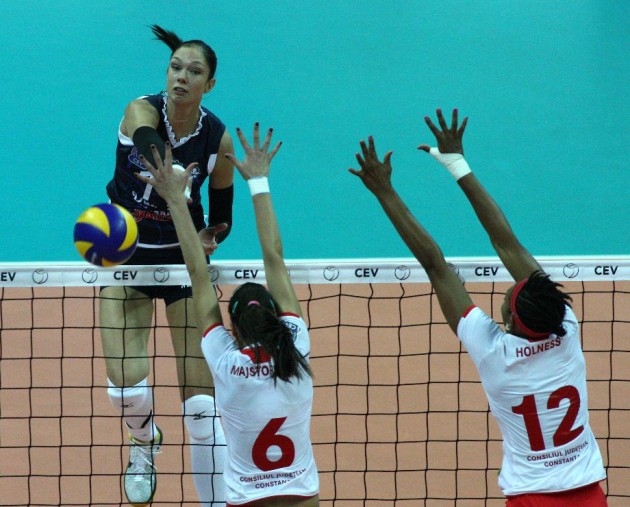 After claiming the previous clash played last week in Romania, the players of Dinamo did not show any lack of focus or determination. Dinamo set the pace in the opening set going up there 20:13 but after that simply stopped playing. Good defense and the service of Jeoselyna Rodriguez could help 2004 Tomis CONSTANTA fight back to -1 (20:19) before setter Evgenia Startseva opted more regularly for Gamova to finalize that section of the game with the score of 26-24.

In the second set Dinamo KAZAN broke away leading by 9 points through Ekaterina Gamova thus pre-determining the outcome of that section. Russian captain Maria Borisenko blocked effectively three times in a row with KAZAN heading confidently into the final rush of the set (25-19).

2004 Tomis CONSTANTA eventually failed to claim a set as the block of Dinamo was simply too much to stand, with Heather Bown contributing the provisional 17:9 after stopping Cristina Cazacu. Tomis attempted a late comeback via some substitutions but could not avoid a second defeat in straight sets to last year’s bronze medalists in the CEV Volleyball Champions League.

“In the middle of the first set my players played too relaxed” said the head coach of Dinamo KAZAN Rishat Gilyazutdinov. “Then they pulled together and observed the right discipline”.

“Today we played better in comparison to last week’s match and managed to put up Dinamo KAZAN a fight” said the head coach of 2004 Tomis CONSTANTA Darko Zakoc. “To some extent the rivals underestimated us”.

“2004 Tomis CONSTANTA is a tough and worthy opponent. There are few tall players in the team, but this is balanced by a very mobile and flexible defense” stressed the captain of Dinamo KAZAN Maria Borisenko.

CL W: Atom Trefl to play Rabita without feeling too much pressure