He began playing basketball in his home town Prijepolje for the team KK Elan. He began his professional career in Yugoslavia playing for KK Sloga from Kraljevo, and was immediately noted for scoring 27 points against KK Crvena zvezda.[8] In summer 1986, he was the top star of the transfer season, signing for KK Partizan for DM14,000.[8] 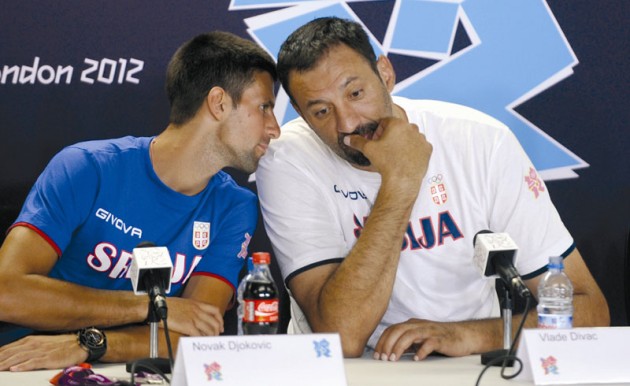 Drafted into the NBA in 1989 by the Los Angeles Lakers, Divac became the Lakers’ first-ever Serbian draft pick; Croatian Kresimir Cosic had been previously selected by the Lakers in 1973. He was also one of the first European players to have an impact in the league. Under the mentorship of Kareem Abdul-Jabbar and Magic Johnson, he improved his play and adapted to the American style of the game. Though he spoke no English, he quickly became popular among the teammates and the public for his charm and joviality. In the 1989/90 season, he was selected into the NBA All-Rookie Team.

Divac was traded to the Charlotte Hornets for the draft rights to Kobe Bryant in 1996 and spent two seasons playing there. During the lockout period, in January 1999, he played 2 games for Partizan‘s “eternal rival” KK Crvena zvezda in the 1998–99 Euroleague season. He then signed as a free agent with the Sacramento Kings where he played for six seasons alongside fellow countryman Predrag Stojaković. Along with Stojaković, Chris Webber and Mike Bibby, Divac revitalized the Sacramento Kings franchise. The Kings rose in the NBA ranks, becoming a perennial playoff contender and later on a championship contender and was at one point the best team in the NBA, leading the league in wins in 2001–02. The Kings however, could not get past the Los Angeles Lakers, who beat them in a 7-game series in 2002.

After the 2003–04 NBA season, he became a free agent. He signed a deal to return to the Lakers, part of a grand plan to overhaul Laker basketball. On 14 July 2005, Divac announced his retirement, ending his sixteen-year NBA basketball career.

In late 2000, following the overthrow of Slobodan Milošević, Divac and former teammate Predrag Danilović took over their former club KK Partizan. They did so on initiative by Ivica Dačić, the club’s outgoing president and, more importantly, a suddenly marginalized politician who, due to his association with Milošević, was forced to leave his post at the club. Seeing that various state-owned companies and community property were being taken over in a dubious manner during the power vacuum that resulted from régime change, Dačić saw it prudent to bring the club’s two former greats as a safeguard against the same happening to KK Partizan. Divac became the club’s president while Danilović took the vice-president role. Freshly retired from playing, Danilović was actually running the club’s day-to-day operations since Divac was still very actively involved with the Sacramento Kings at the time. The head coach they inherited, Darko Russo, finished out the 2000-01 season before they decided in Summer 2001 to bring back their mentor Duško Vujošević to be the new head coach.

Though the duo never stated so outright, their additional motivation in getting involved with KK Partizan again was perceived to be gaining the upper hand on the club’s eventual privatisation process once the new Law on Sports gets passed in the Serbian parliament. Since the exact ownership structure of a publicly owned KK Partizan wasn’t and still isn’t really clear, potential investors decided to stay away, at least until the law appears. Divac and Danilović appeared pretty much out of nowhere in this regard but enjoyed plenty of fan and public support because most preferred to see their beloved club owned and operated by its former stars rather than a faceless corporation or a group of politicians, managers or businessmen close to the ruling coalition. However, after a few years the duo ran out of patience and pulled out of the venture in late 2004 because it became too much of a financial burden with no end-goal in sight. While he stopped performing any official functions at the club, Divac continues to be involved with it in a lesser capacity.

From 2005 to 2006, Divac was employed as European scout for the Los Angeles Lakers.

In June 2006, through his friendship with Predrag Mijatović, Divac linked up with Ramón Calderón as part of the lawyer’s candidate bid for the presidency of Real Madrid polideportivo. When Calderón closely won the club elections on July 2, 2006, Divac was introduced as the head of operations at Real Madrid basketball club.

However, Divac‘s role in the club’s day to day operations was largely symbolic, and even he himself admitted as much in a March 2007 interview for Croatian weekly Globus: “I literally do nothing and I only serve as part of the royal club’s image. I only accepted the job because of Mijatović, who is currently the football director at Real“.

In February 2009 Divac ran for presidency of the Olympic Committee of Serbia against incumbent president Ivan Ćurković. He won the race after Ćurković withdrew just before the scheduled voting.

Divac has been involved in many non-basketball endeavors while still actively playing in the NBA, and more so after he retired. He is an active restaurant investor in the Sacramento, California area. However, his attempts to make major investments in Serbia failed, for a variety of reasons.

The most notable affair was a highly publicized business venture—takeover bid of profitable beverage producer Knjaz Miloš. Divac‘s company “Apurna“, in a joint venture with French dairy giant Danone, ostensibly proposed the best bid, but the takeover was aborted by the Serbia‘s Securities Commission, because Danone/Apurna allegedly offered extra money to small shareholders. In the repeated bid, Divac and Danone eventually withdrew and the sale went to FPP Balkan Ltd., a privatization fund from the Cayman Islands. The entire messy affair caused great friction within the Serbian government, wide speculation about corruption, resignation of the Securities Commission chief, and even a police investigation.

Another similar, though less spectacular, episode happened with 2005 Divac‘s attempt to take over the Večernje novosti, a Serbian high-circulation daily. He made an agreement with small shareholders to take over the company by means of registering a new company with joint capital, which would increase the share capital. However, the Serbian Government intervened and halted what should have been a mere technical move. While the attempted takeover was a “backdoor” one indeed, it was legal and similar cases had already happened. The government ostensibly feared lack of control over the influential daily. Even through the Supreme Court of Serbia eventually ruled in Divac’s favor, he withdrew from the contest, citing “friendly advice” by unnamed persons. Embittered, he decided to stop his attempts to invest in Serbia: “All of this is ugly and I’m very upset… I realized that there’s no place for me in Serbia and my friends can meet me in Madrid from now on… In Serbia, some different rules are in effect, and I can’t conceive them“.

However, that turned out not to be true, as in October 2007 Divac got legally registered as 100% owner of Voda Voda, a bottled water brand previously owned by businessman Vojin Đorđević. That transaction was also followed by a stir of controversy, as Đorđević publicly accused Divac of deceit, asserting that he broke a gentlemen’s agreement they had, and questioning the validity of the contract that Divac presented to the Serbian Business Registers Agency. The circumstances surrounding the deal (as of November 2007) are still unclear: Divac claims that he indeed loaned some money to the Đorđević’s Si&Si company, which was in financial troubles, and after Đorđević failed to fulfill his part of the deal, just used the contract, already properly signed by Đorđević, to claim ownership of the company.

Divac is a proactive humanitarian worker, focusing on aid to children worldwide and refugees in his home country. Along with six Serbian basketball teammates, Divac established the charity called Group Seven, later renamed to “Divac’s Children Foundation“, and works closely with International Orthodox Christian Charities (IOCC), helping them to raise around US$500,000 for humanitarian assistance in Serbia since 1997. Divac’s own foundation, presided by his wife Snežana, provided over $2,500,000 in humanitarian assistance through 1998–2007.

In late 2007 Divac founded a humanitarian organization, “You Can Too” (Serbian: Можеш и ти/Možeš i ti), bent on assisting the refugees in Serbia. Serbia has around 500,000 refugees from the 1990s Yugoslav wars, making it the country with the largest refugee problem in Europe. Around 7,800 of those people still live in collective centers under poor conditions, so the organization has vouched itself to buy abandoned countryside houses, in an attempt to finally solve their accommodation problem.

On 21–23 September 2007, Divac organized an official farewell from active basketball career in his hometown Prijepolje and Belgrade, simultaneously promoting the “You Can Too” campaign. The spectacle culminated in gathering of Divac and his worldwide friends in front of 10,000 people outside the National Assembly building.

Read news from our Did you know? section, every Friday a new story, tomorrow read about All I want for Christmas…