Andrija Geric: I love the fact that I can spent more time with the family

In time, more and more I began to love it. I spend more time with family and it feels good, and on the court trying to make the good people and players from younger players. 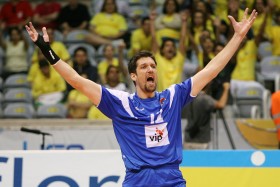 Many people just look how they can go abroad, one guy has decided to return to Serbia. Not only that, it has set the task to help young people, to get them on the right direction, one that he walks on a long, long time.

In the first club in his career Andrija Geric appeared last summer, to drink coffe with old friends are at any coffee,and to ask if he could train with Vojvodina. And wich club would not want him. And so it all began, and lasts to this day.Vasa Mijic, his former team-mate managed to keep him not to go abroad.

“First they allow me to train with them, to prepare for the season.I was serious about this, so Vojvodina later came with offer to stay at least until I find something abroad. I have my own plans, and theory that says that we should not go abroad at any cost. If money is a life changing, then fine, but if this is not something special, there is no reason to go.Offers I got from Germany and France would not change anything much, so I stayed and waited. On the other hand director of the club is my friend Vasa Mijic.”

I love the fact that I can spent more time with the family. I enrolled and the faculty, Psychology, I intend to finish it as soon as possible. This was my first start, in the last decade and a half, when the first January did not have to be packed. Or to return to the country where I play or if I was there, then to a game, tour preparations. I like the fact that children can ride in Hopscotch, for birthdays, Sophia moves in preschool, who knows how it was that I was through. All we do is very interesting.

Father with his daughter, but a similar “role” has on the training and matches, when it comes to much younger teammates. The idea is that kids are maturing next to him, and he says, “are we have succeeded, time will tell.”

Whole league is very young and inexperienced. Much things they do wrong, do not play well and results to show in Europe are bad, where all teams lose at the start. My goal is to influence on a young people to not make mistakes, to play more freely, and responsibly. Honestly, I spend a lot on the field more than planned, was supposed to be there only when it matters. Well, what is – that is, we hope to end the season have all reasons to celebrate. The aim is that of the boys who have an average of 20 – odd years and make good players and good people. – said Andrija Geric.

I was aware of everything when I decided to stay. I am sorry that volleyball is not on a former level, which does not have any audience in venues where we play. Therefore it is up to us to play better, to win trophies and the audience back to the stands. And then follow in the defeat, many of the poorer teams. Youth teammates and oscillations in the game can not even compensate for its quality and experience.Then I am very angry at myself. Of course, angry at teammates, primarily because it seems they still do not know what they are worth. A worth. You need to be more confident.

When Andrija Geric “recently” went abroad as a kid, the league in our country, which is differently named, was far superior?

I know where I came from, what I expected and what are we getting into, that’s often repeated in recent months. Even as everything has been operating. I wish that one day all is well, it works again, it would be nice, even at the level of Italy. However, some things need to be fixed. No one wants to invest in volleyball, and my guess is that if someone does, and it should not be a “huge amounts of money” for a few years can have the kind of results even in the international.

As things stand, very easily could happen to his career will be ended in Novi Sad.

I dont want to be a coach, it is hard work, unless it would not be in a school two – three times a week with little children. I’ll try to consolidate some things, psychology, which I study, with some organizational skills. Of course with
the volleyball in which I was 20 years.

Malagurski: I hope that I will be...