In an interview with a German receiver Maren Brinker, she shared her thoughts about new team, new teammates, and talked about recently finished European Championship as well. 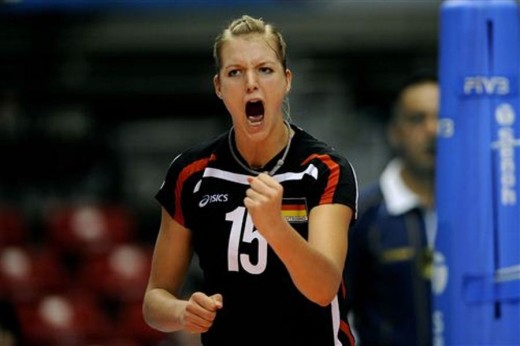 Your team won last game but you didn’t spent a lot time on court. Is there any injury problems or it was coach decision?

“It was coach decision. I think we have very balanced team so each of us have a chance to play. And, from the beginning, girls really played very well. Only after the second set we had some problems and I’m glad that I helped my teammates.”

Bogumiła Pyziołek had a great performance in the third set.

“In the third set we didn’t played at our level for a few time but I’m delighted that we succeeded at the end. And I’m glad that Bogumiła returned on court after injury. She showed up on the pitch and made a few good moves, and we won.”

You are in Poland for a very short time. Do you have a wish to stay here for another season? How do you like Wroclaw?

“Wroclaw is a beautiful city with lots of things and places to explore. You can see many historic objects and old monuments, they are really amazing.”

When deciding whether to play in Poland, you probably had some knowledge about Plusliga and the players there?

“I knew a few players who told me a good things about Plusliga. Two years ago we played against Muszyna in CEV Champions Legaue, so I was already contacted from the Polish club. And when I’ve got the offer to play in Plusliga, I know what can I expect here”

“At this time, it is difficult for me to make a comparison, because I’m here for a short time. However, I think that the Italian volleyball defense system is better because they are working a lot on it. But on the other hand, here in Poland is a lot tall players, so they are good in block definitely. As a conclusion, I can say that both leagues have different challenges and goals, but the level of play is similar”

Could you rate atmosphere in the new team? What do you think about work with new coach?

“I didn’t spent too match time with the team but as I could see there is really positive atmosphere for now. The coach is experienced and he knows a lot about volleyball. He has a lot of patience for us.”

A few weeks ago, national team of Germany took silver on European Championship for the second time in row. Do you think that you could do the job better?

“Before summer, we set a goal to reach final-four. But, of course, we wanted to win a gold medal. We have to accept that the Russia was better than us. They were stronger physically and its game deserved to win gold. After all, I’m happy with our team, because the game in front of our spectators and under the pressure is not easy. We did everything that we could and we lost to a better team. We should be satisfied with this achievement.”

What are your expectations in the new season?

“We have to go from match to match. But, what I saw so far in our team is a real potential to get top positions in the league. If we continue to grow in the right direction, I think that we can beat anyone, so it is our main goal.” finished Maren Brinker.