In an interview for CEV, the opposite of German national team, Georg Grozer, has spoken about his preparations for the game, about crowd in Poland and goals at World Championship. 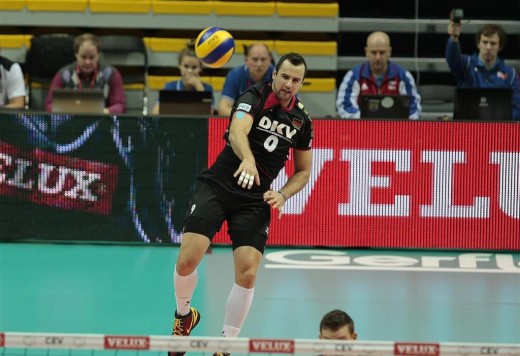 Grozer reveals he follows a special routine before the start of any Volleyball match:

“There are many different things I usually do. I relax after taking lunch, then I shave and in the meantime listen to my favourite music. After this, I drink coffee and before we drive to the stadium, I always call my wife and children and we chat on the phone. Only after that the real preparations get started in the locker rooms.”

The son of Georg Grozer senior has a special connection with the host country of the upcoming World Championship, since his wife is Polish and he spent a couple of seasons playing for Asseco Resovia RZESZOW.

“I really look forward to travelling to Poland,” Grozer admits. “It makes a lot of fun to play there where the fans are so great. They really love Volleyball and they create a terrific ambiance.”

The roster of the German national team includes seven players with a “Polish connection”, i.e. who have played, are playing or will play in the national league of the country hosting the World Championship.

“It could be an advantage,” Grozer acknowledges, “if the fans support us. A good ambiance would certainly help us.”

The FIFA World Cup showed the importance of team spirit which was the key to Germany’s success in Rio de Janeiro. Does the same apply also to the Volleyball crew?

“The team spirit is very good in our group,” Grozer reckons. “However, we still need to work a little bit on it so that it works on the playing court as good as it does off the court. However, I am confident that we will achieve this goal by the time the World Championship gets underway. It all depends on how we, as a team, will cope with our ups and downs, since there will be good and bad days throughout such a long tournament which is very demanding from a physical as well as from a mental standpoint.”

Germany’s head coach Vital Heynen has stated that his goal is to win a medal. Does it sound realistic?

“If you do not have any goals in sport, you will never make any progress,” says Grozer. “Everything is possible as long as you are convinced that you can make it there and you are determined to fight in order to achieve your goal.”

Grozer – who has spent the last couple of seasons in Russia with Belogorie BELGOROD – picks out the reigning Olympic and European champions as the pre-favourites for the gold medal that will be at stake on September 21 in Katowice.

“In my opinion Russia is the hottest candidate for the title. However, every team stands a fair chance since the level is pretty even right now.”

WCH M: Kolakovic – “We are not favorites, but we want medal”