EXCLUSIVE FOR WoV: Aaron Russell – “Targeting a title with Perugia is a very realistic goal”

The FIVB World League rookie Aaron Russell was one of the biggest surprises during the tournament. His performances at the World league were very good and other coaches praised him and just said “Keep going”. Exclusively for WorldofVolley, Aaron Russell talks about his debut in World League but also about his first professional contract… 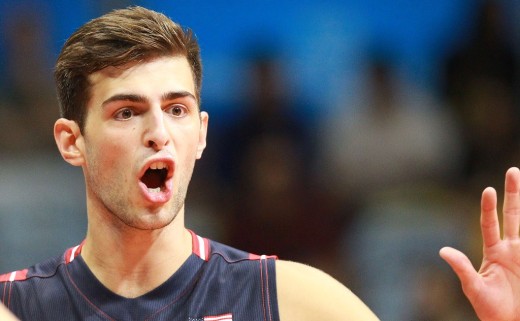 It was your first time to play in World League. How do you rate your performances?

“I think that I did well in my first World League. I was stepping into a new role on a new team and I think that I adjusted and filled that role well. I would also say that I improved and grew more comfortable out on the court as the league went on so I would say that personally, it was a success.”

Are you and your team satisfied with the bronze medal?

“We are happy to have medaled, but it is not the one we wanted. However, we did overcome a lot of adversity throughout the World League Finals so that was good for us.”

France took the first place. Surprise or not?

“I am not surprised that France won gold. They are a good team with some very good players. Some people could be surprised since they advanced from the other group but I was not.”

Also, for the first time, you’ll play abroad. Why did you choose Italy?

“I chose Italy because I have always liked the country and I know that their leagues are good ones. I want to improve my level of play and playing there will help me do that so I think that it will be a good experience for me.”

“I have not spoken with any members of my team yet. I have seen and played against some but was unable to talk with them. I hope to maybe if I see them at a tournament later in the summer.”

Perugia will target championship title in season 2015/2016. Does it seem like a real goal to you?

“I think that targeting a championship title is a very realistic goal. I know the team was relatively successful last year and I know that we have signed some good players and a good coach so I think that aiming for a championship is a good thing,” concludes Aaron Russell!

INTERVIEW: Emiliya Dimitrova for WoV – “We...