The head coach of German national volleyball team Vital Heynen has made a short analysis of the upcoming World Cup in Japan. 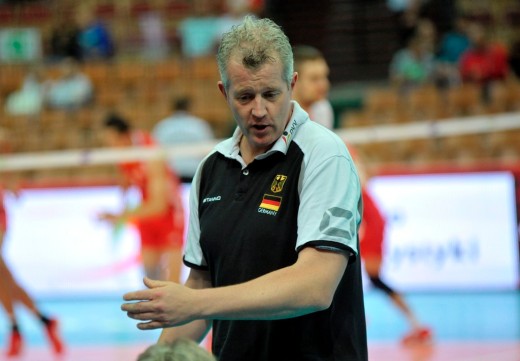 In an exclusive interview for our website, Heynen says that Russia is the favorite number one!

Who are the main favorites for winning two tickets for Rio?

“I would say there are four favorites: Russia, Poland, Italy and USA. These four big teams will fight for two tickets that lead to Rio. Russia will take one ticket while USA probably will grab the second ticket.”

Who is going to make surprise?

“Iran should be a team on paper who could make a surprise, but after not so good summer, it will be so hard for them to do it. I think, there will be no surprises”

What’s Russia capable of? Will Tetyukhin bring something new to the team and is he able to play so many games?

“They are the main favorite. Tetyukhin will balance the team again even if he is not so young anymore. I consider him very high in a lot of aspects, he is a real fighter and he cares about his body. I think that new guys, Viktor Poletaev and middle blocker Iliya Vlasov will contribute a lot to this team. Vlasov and Muserskiy will be the best pair of middle blockers you’ve ever seen. If they can bring ball to the net it will be tough to stop these two players and that’s why I put Russia at the top!”

Does Italy have chances with Juantorena in its roster?

“It’s not easy to say. They are strong, they have new coach and Juantorena but I’m doubtful if they can hold the whole tournament. That would be problem for Italy. Like I said, some players got injured and they lost a lot in quality.”

There will be a lot of volleyball stars. Maybe it is tough to predict, but let’s try – who is going to be the most dominant player?

“I think two middles from Russia, Vlasov and Muserskiy will be the most dominant players. I think that they will dominate like never before. I’m looking forward to watch them. Of course, Juantorena will be dominating, Zaytsev…Anderson as well with the U.S. team who is the best balanced team at the World Cup”

Many national teams will play at the World Cup and later in European Championship – is that good for them or not?

“It’s good for the team. World Cup is an amazing tournament, with 12 quality teams. They have the chance to qualify for the Olympics. But, the teams who will play in European Championship later, it will be hard for them to perform on high level two times in a row.”

Germany will miss the World Cup. Do you regret of dropping this competition?

“Of course I would like to be there but only the best two European teams are going there. Italy and Russia were the best ranked, that’s logical. Poland got the wild card which is logical as well, because they are World Champions. I was hoping that we will get the second wild card but it didn’t happen. That’s life,” concludes Vitaly Heynen in an interview for WorldofVolley.

Have you ever watched Michal Kubiak playing as middle blocker (VIDEO)

Poland didn’t get any ‘wild card’… The team participate in a World Cup tournament as a world champion. There were no ‘wild cards’ this time.

In fact, Vital Heynen talking bullshit!
I thought he is more knowledgeable guy?