NEW YEAR’S INTERVIEW: Mammadova – “The best volleyball players in the world are in Russian and Turkish leagues”

When you say Nataliya Mammadova everyone who is related to volleyball knows that we speak about 196 cm tall player who is the dominated in every team for which she plays. 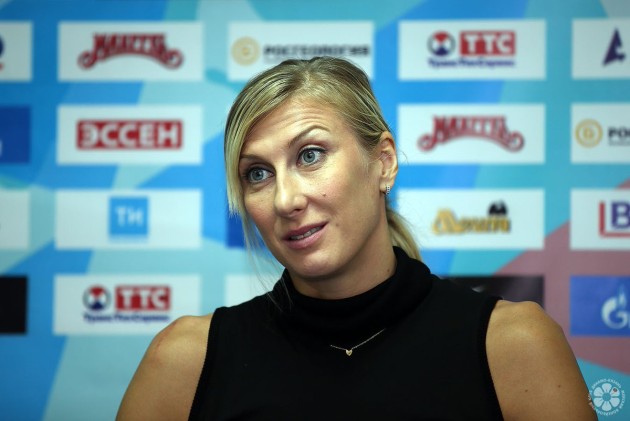 Mammadova is for sure one of the volleyball icons. In her career, she won many individual awards thanks to her strong and high attack and the last one is the MVP of the Russian Cup.

In the previous three seasons, she played for Volero Zurich and won all domestics competitions including the bronze medal at the FIVB Club World Championship 2015 and 2017. Here you can see her amazing stats.

WorldofVolley made an exclusive interview with Mammadova who as the captain of Azerbaijan National Team led her team to the semifinals of the European Championship 2017 but at the end, they finished on the 4th place.

Do you think that Dinamo Kazan has a chance to win the National Championship this season?

“This National cup trophy was one of our goals before the start of the competitive season. The second goal is a National championship and I hope that we will succeed. Our team is really good and I think that regarding the composition of team roster we have to and we will make this achievement. “

You have made a huge contribution in defending the trophy of the Russian Cup, was it easy for your team? In the finals, you played against Yenisei.

“Yenisey changed the team for the better this year and signed some players who were and some who still are in Russian national team, so their performance should have been much better. I have to add that it was all but easy what we accomplished and I am very satisfied that the Trophy stayed in Kazan for at least one year. “

Do you think that Dinamo has the team who could be on top three in CEV Champions League?

“Our management has set goals in all competitions for this season just as they did in the past. Champions league is also one of them. Our first milestone is, of course, to qualify for Final Four. When we succeed we will do our best to win all we can.”

What will be the success for you in this season?

“We are very happy that our goals have started to come true. Our satisfaction will only rise if we manage to take the titles on Championship and qualify for F4. “

Many players dream about playing in Italy but in your career, you played only once. Is it possible to see you there maybe next season?

“In comparison to the years before I noticed that now the best volleyball players in the world are not in Italian clubs anymore. Today they are more interested in Russia and Turkey in particular. Whan, I had to choose which offer to accept the advantage had always the participant in the strongest National championship.”

Now you have 33 years, for how long you are planning to play volleyball?

“My physical and emotional condition is excellent and I feel capable to achieve even more so I have no reason to stop. But I am aware of my age and would like to settle down and have a family.”

Do you regret something in your career?

“I think that it is too early to regret anything because I can do so much more in professional volleyball. I am confident that excellent results are just about to come and that there will be plenty of them!. So when all goes by and I retire then I will have enough to contemplate about and summarize my career.”

What will you do after your career? Will you stay in volleyball?

“After I stop playing volleyball I would like to be there for my family. After forming the family I am ready for all options.”

Who is in your opinion the best player on the planet right now?

“In my opinion today there are more than one dominant player but I regard very highly Goncharova, Brankica Mihajlovic, Tijana Boskovic, Zhu, Kosheleva, and Kim, which I consider to be the best in the World.” finished Mammadova, which games you can see in our WoVVideo.

NEW YEAR’S INTERVIEW: Eda Erdem – “I dream to play at Olympic Games 2020 and end my career in Fenerbahce”

I bet even the middle tier clubs of Brazil could beat Dinamo Moscow or Dinamo Kazan. The Russian League is just dreadful.

Re: @russian league is a joke Russia League is not a joke, They still have a really strong league as they have really good local players.

Re: @XuYliun it is. Nobody watches it because they are terrible and incredibly dull. All their best players in the national team and all are mediocre besides Goncharova or Startseva.