Luxembourg, January 22, 2012. The Executive Committee of the CEV Small Countries Division held a couple of weeks ago its first meeting of this Olympic Year in the “Novotel” hosted by the Luxembourg Federation. 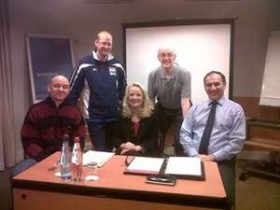 This was the second meeting since its re-organization and the new Executive Committee was elected in Vienna last September 2011.

Newly appointed Project Manager Detlef Schonberg reported on work he had begun and discussed further plans with the Board.

An application to the FIVB Development Fund will be submitted next month.

The main emphasis of this plan is the development of all SCD member Federations from grassroots level all the way to elite performance with the focus being initially placed on youth development, camps and projects for both Indoor and Beach Volleyball.

President Fleming explained: “One of the aims of our application is to help support those Federations which struggle to participate in our events, either within our competition phases and or with the development of coaches and officials. Summer camps in Luxembourg and Malta are being actively considered”.

President Fleming noted: “The Faroe Islands and Malta have organized the junior women’s qualification rounds each and Scotland is only two months way from the junior men’s finals coming up next April 2-7. Cyprus will host the junior women’s finals also in April 2012. Later on in this year we will have our men’s and women’s senior qualification rounds with their finals in 2013. It is encouraging that more Federations from Small Countries are involved than in previous years within our CEV SCD Championships”.

The Executive Committee has begun planning for the September FIVB Congress in the USA after the London Olympics and for the CEV General Assembly in November and its reports for that meeting shall also be presented at the CEV Zonal Associations meeting scheduled for June in Vienna.

GP 2014: Lucia Bosetti has been successfully...

WCH M: Interesting facts – how many...