Volleyball serving is a fundamental skill in volleyball required from every player. Find out how to become an efficient server, practicing with Akademia Polskiej Siatkówki. 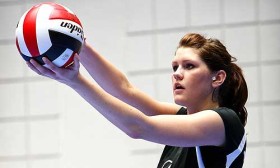 It’s a play for 3-to-3 on proper courts, depending on age of players. Each side of the court is divided into 4 parts. Player from team A beginning the game, stands behind the end line while the right (P1) and left side attackers place themselves on the court adequately. On the opposite side two players from team B stand in the back row on the right (P2) and left (L1) side and another one (P1) positions himself close the net (as you can see on the picture below). 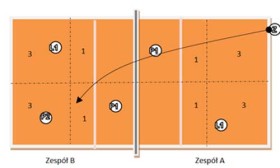 Server serves the ball to one of the marked zones. 3 points are awarded if the service is made to one of the two back zones and 1 when the ball is directed to the front one.

Team can score 2 additional points if server says to which zone he’s going to direct the ball before serving and will realize this purpose. Receivers try to hit the ball three times (pass, set, attack) and put it back over the net towards serving team. Teams take turns serving the ball after every completed action. Each server has to make 3 services before rotating.

To make the game easier for younger or less skills players grant point if the ball goes over the net after making a service(1 point if it’s hit out of the court, 2 when lands inside the court and 3 for hitting it into the particular zone). You can also lower the net or tell player to come closer the net while serving. To make the game more demanding for older or higher skills players play 2-to-2 and grant points only if player serves the ball into the zone which called before. It is recommended to reduce the size of the zone which the ball is served to or increase the number of zones.