Yaoundé, Cameroon, January 15, 2012- The Yaoundé Multipurpose Sports Complex (Palais Polyvalent des Sports de Yaoundé) will host the first of the 2012 CAVB competitions when it receives five African National teams competing for the 2012 African Olympic Qualifications 17 to 21 January, 2012 to determine the African slot at the Olympics. 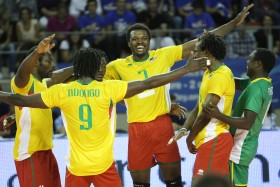 The hall that was established in 2009 received one of the continental qualification pools for the 2010 World Championship and now it is ready to host a bigger continental event.

The eventual champions of the round robin tournament will earn the right to compete at the London 2012 Olympic Games in July and August.

The reigning African champions Egypt beside the runner up and host team Cameroon, Tunisia, Algeria and Ghana will be the candidates for the tournament competing for the African Olympic berth.

“We need to have a successful event here in Cameroon for this prestigious occasion of the Olympic Games Qualifications,” said Cameroon Volleyball Federation President Louis Timba ahead of the competition.

“What makes the event more valuable is the participation of all the continental big forces specially the last African Nations Championship final four teams Cameroon, Egypt, Tunisia and Algeria” he added.

The Pools for the 13th World Beach...