Nicosia, Cyprus, January 23, 2012. Cyprus Pokka - A.E. KARAVA recently qualified for the 1/8 finals of the 2012 CEV Volleyball Challenge Cup after claiming a 3:2 home win against Finland’s Lakkapää ROVANIEMI. This is quite evidently a great result for the club that hails from a city that has been de facto under control of Turkey’s military for the past 38 years. 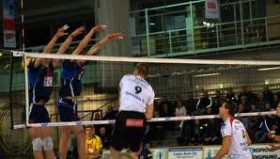 The match turned also into a very special moment that went well beyond its competitive side and value.

“It is the first time that while traveling abroad we have experienced so much love and hospitality” stressed the club President of Lakkappää ROVANIEMI Tapio Oiva upon receiving some special gadgets and memorabilia from his Cypriot counterpart, Mr. Constantinou.

“I found it really nice that a special message in Finnish language was included in the match program” he added.

“I am grateful for the kind words expressed by our guests from Finland as they are even more valuable than our qualification for the next round of the competition” said the President of the Cypriot club.

“They have shown much understanding for our situation and I would also like to thank the Finnish club for the warm welcome our players and officials received in Rovaniemi last week”.

The whole Cypriot Volleyball community got together around the team from Karava, some people by attending the game directly at “Spyros Kiprianou” hall, many more by following the live score on the CEV website.

Back to the game, Lakkapää surprised the home side by winning the first set (19-25) before KARAVA answered back to draw level (25-15).

After a splendid final rush, the Finns pocketed set 3 (25-27) but the Cypriot guys fought back with glowing hearts to call for the tie-break (25-16).

Finally, Pokka A.E. KARAVA took the tie-break (15-12) thereby avoiding the risk of a golden set and could celebrate the greatest international success in their history, with the next rival in the 1/8 finals being Belgium’s Prefaxis MENEN.

The match was attended also by the President of the Cyprus Volleyball Association, Mr. Damianos Hadjidamianou, who presented the players of both teams with special souvenirs, and by Mr. Pambos Stylianou, Chairman of the Cyprus Sports Organization, who also congratulated the guys of Pokka A.E. KARAVA for their great achievement.

ECH M: Parken getting ready for another...