What were your first impressions when you were at the volleyball game for the first time? Were they colors, an explosion of power, noise, moves, or rapid, fiery actions? 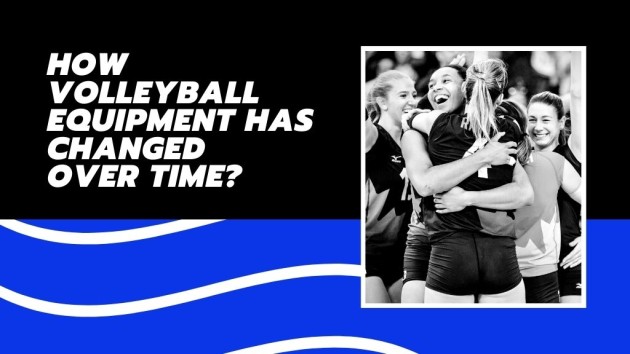 Imagine having a time machine and going back a few decades, to, say, 1964. The volleyball you would see then would look like the one today. The essence of volleyball has not really changed in the past 50 or more years, although some details have undergone changes. Apart from game rules, the volleyball equipment (or, as some call it, volleyball accessories) had evolved as well.

“If you look good, you feel good, and if you feel good, you play good,” is a phrase coined by Pro Football (NFL) Hall of Fame inductee Deion Sanders. And, there is some truth in that statement. Over the years, volleyball uniform (jersey) has progressed. So were shoes and kneepads… well, almost every piece of volleyball equipment has been modified to some extent.

Volleyball players are willing to embrace new trends, new attractive looks. Sometimes, these changes make playing volleyball easier for athletes, while sometimes, modifications in the equipment have a purpose to just look appealing. These changes can be seen from college and high school volleyball as non-professional areas of this sport but they are a ’virus’ that catches professional volleyball, practically, by the same speed.

We will start with jerseys because we have witnessed they definitely undergone the biggest changes – we are free to say, advancements – so far. From the conception of volleyball in 1895, and until 1916, jerseys were not created or used for this newly developed sport. However, soon after, the progression began. From loose and conservative jumpsuits, the makeover has led us to tight spandex and well-designed pieces of art.

At first, jerseys were sleeveless (like basketball uniforms). Then, they got modified to short-sleeved, all the way to long sleeves (volleyball players in the NCAA). From the 1980s to today, jerseys got tighter and made of better material, capturing the true essence of what volleyball jerseys should be about.

Jerseys with short sleeves are still dominant but the fact that more and more players wear arm pads underneath uniforms shows that long-sleeved jerseys might prevail everywhere in the near future. Two factors are decisive for the jersey transformation and might be decisive for the possible overall transformation, apart from the US college: appearance and performance.

Performance-wise, the ball is faster when bouncing off the arms covered with long sleeves and hurts less when you dig. For this very reason, liberos are often seen to wear arm pads in professional volleyball in which short sleeves are a standard.

Shoes that were used in volleyball in the early existence of this spot were constructed of cotton canvas with a thermoplastic rubber sole. That is how it was from the end of the 1930s. Actually, there were no shoes specifically made for volleyball until 1930. These shoes evolved into those with a direct injection sole in the 1970s.

Rubber sole material is an integral part of every volleyball shoe, giving excellent traction on the gym floor and prevent the shoe from sliding on the floor. There is also midsole (foam, gel, or air cushions) material, designed to support the ball of the foot, which suffers the most from lateral movements of volleyball players.

Back in the old days of volleyball, kneepads used to be much more massive and heavier than they are today. They resembled a turtle’s shell. Today, kneepads are designed smoother – they are much flatter and much more flexible. It is not just an appearance that was changed over time.

Kneepads had a sole purpose a few decades ago – to protect knees from getting torn when players fall and dive. For some reason, probably for aesthetics, players now wear kneepads below their knees, where they provide no protection whatsoever.

SRB W: Bjelica returns to play in her home country

What Is The Best Volleyball Stadium In The...

What are the Most Important Events in the...

Meet The Next Iteration Of Volleyball: CROSSNET

WL: Rouzier made it look easy…