In the semifinals of the Cup Snježana Ušić Cup, it was once again shown that the cup is an unpredictable competition in which all sorts of surprises often happen. 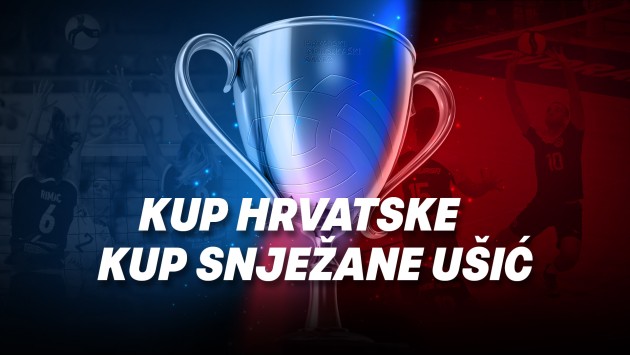 The volleyball players of Kaštela, last year’s finalists, felt this on their skin, visiting the semifinal match in Rijeka, against the team they have already defeated once this season, in the 9th round of the SuperLeague with 3-0 at home.

However, this time they came across extremely cheerful home players who won the first two sets (25-19, 26-24), then Kaštela equalized to 2-2 in sets (25-20, 25-13), and in roulette of the fifth set, the victory was deservedly won by the home volleyball players of Rijeka CO. After this 3-2 victory, the women team from Rijeka will again find themselves in the final with HAOK Mladost, on March 10, just like in 2019, when they lost from Mladost 2-3.

After the match, the assistant coach of Rijeka CO, Iva Lovrinov, stated with satisfaction:

„We subconsciously believed that we could beat Kaštelanka in our hall, and in the end, it came true. Of course, there were a lot of mistakes in that fight, but we are a very young team that is still growing from game to game. An example of this is that in last year’s autumn semifinals of the Croatian Cup we lost smoothly to Kaštela 0: 3, as well as this season in the SuperLeague, but we have improved a lot since then and we are going to the finals with great ambitions. In this match, we were also helped by the fact that Kaštelanke beat the favorites Mladost last weekend, so they probably unconsciously relaxed against us.“

Zoran Grgantov, the coach of Kaštela, finally congratulated Rijeka CO on the victory and the passage to the finals:

„We haven’t started well since the beginning of the match, especially at the service reception, we had too few players in the mood to attack. The game in block and defense was also below our level. We still managed to come back in the third and especially the fourth set, but in the fifth, the home players showed, despite their youth, a lot more emotional stability, and maybe more desire and will to win.“

The current winners of the Croatian Cup, the volleyball players of Mladost, had much less trouble on the road in Kaštela against Marina Kaštela, winning routinely with 3: 1, and their coach, Leonard Barić, who two years ago sat on the Rijeka bench in the Croatian Cup final, after He praised his team for the match, saying:

„The girls played a great game, engaged, and the result is this well-deserved victory in which we dominated in all segments of the game. I will mention only 15 points on the block and 9 aces on serve. In a way, in the preparation of this match, we lost to Kaštela last weekend, because we reduced our mistakes, which were really too many in that match, as many as 42 unforced errors. By the way, on Saturday in the Super League, we will meet again with Marina Kaštela, within the Super League in the Dom odbojke.“

At Kup of Croatia, Mursa-Osijek struggled well to win and get to the finals, against a very good Split, after two hours of play. In the end, they celebrated with 3: 1 (26: -28, 26:24, 25:19, 26:24), but from the results by sets, it can be seen that the battle was fought for literally every point because three of the four sets played ended in contrast.

Mario Teppert, the coach of Osijek, said after the match:

„We expected such a tense match, and I must say that we played a good part of the match in spasms. Probably because of the pressure we put on ourselves, so we made a lot of mistakes. Split proved to be a strong and solid opponent again, but the calm at the end of the sets led us to the final victory. As far as the finals are concerned, we really don’t care who we play against because these are extremely high-quality teams, but if I could choose, I would still choose Kaštela.“

The finals are scheduled for March 11, and the second finalist will be announced on February 16 after the meeting between Ribol Kaštela and the defending champions of the Croatian Cup, HAOK  Mladost.

Want to be an ultimate defender? (VIDEO)