Serbia, hosts of the Pool F FIVB Grand Prix tournament in Belgrade, began the weekend in style by beating a promising Netherlands side in straight sets (25-18, 25-16, 25-21) on Friday. 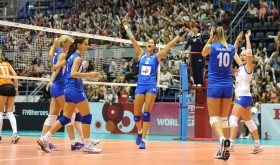 The result stretched their longest winning streak of the competition to a total of 5 matches, with a 4-0 record this year.

In set one, the Dutch girls got off to an early 4-0 lead before Nataša Krsmanovic managed to get Serbia on the scoreboard. After the initial scare, the home side picked up the pace and went ahead 8-7 at the first technical break.  Serbia then built a steady gap (12-9) and maintained their advantage. They wrapped up the set at 25-18, with a confident block by Milena Rašic.

The second set began closely, running up to 6-6, before Serbia again got a narrow lead. Netherlands lost momentum and Serbia took set two 25-16.

The Dutch side led for the start of the third set, but again Serbia’s superiority, epitomised by Jovana Brakocevic’s strong game, gave them a strong hold on the match. They closed out a 25-21 win, to take the match 3-0.

Jovana Brakocevic and Brankica Mihajlovic were the match’s top scorers, with 17 points each.