Few days ago, the final entry of Korean Female National Volleyball team was released. As you can see, total 12 players will play in AVC and upcoming international competitions. But when it came up, there was something unusual. 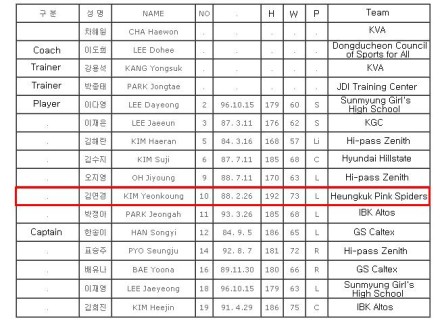 At the list of players, it says Kim Yeon Koung belongs to Heungkuk Pink Spiders. Does Fenerbahce let KVA describe Kim as a player of Heungkuk? According to the article weeks ago, Fenerbahce would let Kim join the national team of Korea if KVA sent them an official document for permission. But KVA has admitted HK is the only club that Kim should belong to.

Moreover, few hours ago, Dong-A Ilbo (Korean newspaper) released the article about Kim’s recent action connect to FIVB. According to the article, FIVB has pushed KVA to issue ITC for Kim Yeon Koung and FIVB will hold the Legal Committee in Swiss very soon.

This FIVB’S movement embarrassed HK and KVA. The writer said Fenerbahce began lobbying behind to issue the ITC and this movement is the result of Fenerbahce’s lobby.

Andrea Anastasi for WoV – ”Juantorena is the best”

INTERVIEW: Marcin Walinski for WoV – “These...