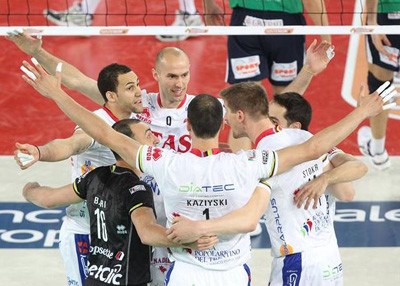 The match for the third place of the Champions League for Men was played in Atlas Arena in Lodz between Trentino from Italy and Arkas Spor Izmir from Turkey.

In a very exciting match, that lasted 3 sets won Trentino of the coach Radostyn Stoytchev.

The Italian team was better in the first set, winning with 5 points difference 25:20.

In the second set, Arkas of Glenn Hoag, did not manage to change the result in its favor and lost with 19:25.

The third set also ended with the victory of Trentino with 25:19 .

INTERVIEW: Antoine Brizard for WoV – “The...