Ahly and Esperance fight for the Club World Championship ticket

The African representative at the 2014 FIVB Men's Club World Championship will be determined on Saturday when 10 time champions Ahly (EGY) battle it out against 3 time champions Esperance (TUN) in the 2014 Men's African Club Championship final at the Olympic Hall in Sousse, Tunisia. 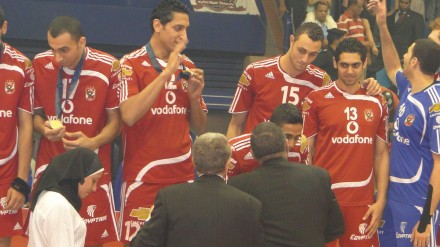 Winners of the final will clinch the title and book a ticket to the FIVB prestigious event in Belo Horizonte, Brazil from May 5 to 10. The bronze medal match will take place between two Tunisian teams Sfax and Etoile du Sahel.

Ahly led their preliminary pool D with 4 straight victories over Ahly Tripoli (LIB), Prisons (CMR), FAP (CMR) and Beau Vallon (SEY) dropping only a set against the Libyan side.

They then continued their victory rhythm after beating Algeria’s Bourj Bouarrirj in the quarterfinal before they passed the biggest obstacle in the semifinal after beating defending champions Sfax after an epic tiebreaker to claim a final spot.

On the other had Esperance (TUN) who won the Arab Club Championship last month are now seeking their fourth trophy after 1994, 1998 and 2000 to make the trio of the Tunisian, Arab and African championships.

Their line up 7 current national team players beside the Russian Alexander Sorokltove and now they want to regain the cup they didn’t gain since 14 years.

Esperance led the preliminary Pool C with 5 straight victories over Ahly Benighazi (LIB), GSU (KEN), Port (CMR), Nemostars (UGA) and Mugher Cement (ETH) losing only a set in their way to the quarterfinal against the Libyan side. They took over Setif (ALG) in the quarters before they eliminated the organizers Etoile du Sahel in the semifinal

TUR W: Win and get the trophy, Fener is so close