WL: USA victorious at the battle for Florence! 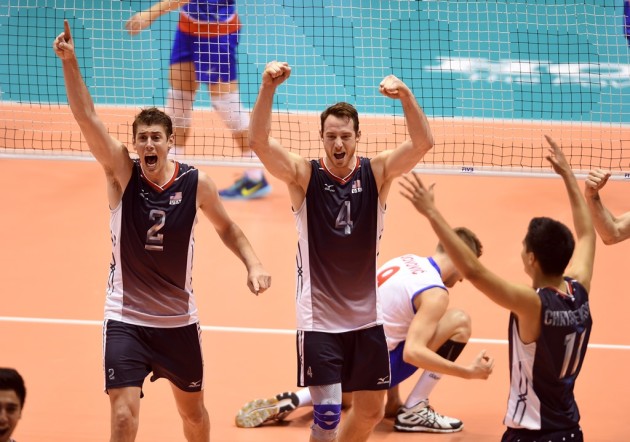 The first set went to Americans, thanks to their serve. Throughout the whole set away squad had this game element on fire. Anderson, Sander, Lee… You name it, everyone had an outstanding service.

Amazingly, Serbs managed to resist pretty long despite that starting disadvantage. Home team was equal until 14:14… Then trailed only one at 17-18… But, USA then won some crucial points and increased lead to 19-23… It was 0-1.

Beginning of the second set suggested that Americans will double their lead. They were one point ahead on the first TTO (7-8), and then increased advantage to 9-13! But, Serbia won the following point and it was Nikola Kovačević’ turn to serve…

Third set presented a real drama. Especially at the very end.  USA was up by two several times (13-15, 15-17, 18-20, 19-21) and finally managed to break persistent Serbs with two consecutive points for 19-23… But, did they break them. NO! Again with amazing serves of Nikola Kovačević home team returned into the game. It was 22-23! Nikola then made a mistake, served the ball into the out and USA had first set ball.

It did not use it. Neither did next one! Atanasijević made a strong spike from a counter and it was all tied at 24-24! Crowd was ecstatic! But, not for a long time. After both sides had won a point (25-25), Americans made good attack (25-26) and then even better defense. Lee blocked Atanasijević… USA was in the lead again – 1-2 in sets.

That block gave USA team enormous boost. You could see that in the fourth set, it was the least close one. Away team was almost perfect in attack, while Serbia had many troubles with mistakes. USA took the three-point lead at 12-15, but the real series came a bit later when Americans went to 14-21…

It was all over, USA won the battle for Florence, USA will play at the Final Six of the World League 2014!

WL: Russia in the Finals

BREAKING: David Lee is back in Russia!