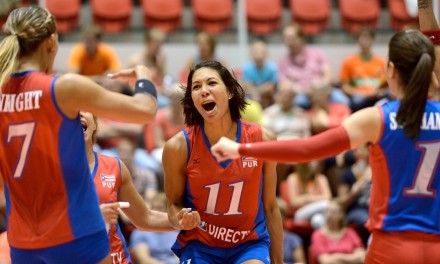 Puerto Rico took the lead in the beginning of the first set and a 3-meter attack of Aurea Cruz scored 5-2. The Puerto Ricans build out their advantage and the score bord in Doetinchem, the Netherlands showed 13-6. At the second obligatory break the score widened to 8-points (16-8). Poland tried to cut down the lead (16-11), but couldn’t prevent Puerto Rico cashing the set at 25-18.

In the second set Poland started strong (1-5), but Puerto Rico scored four points in a row and tied the score 5-5. The Caribbean team led 8-6 going into he first break and both teams closed the score several times during the set. Puerto Rico managed to creat a small lead (16-14) and a hard attack of Stephanie Enright who used the Polish block scored: 18-15. Poland didn’t close the gap and Aurea Cruz ended the set with a kill block: 25-18.

Again a good start of the Polish team (0-5) taking a 7-point lead 3-10 in the third set. Poland fought hard and got back in business taking a comfortable 7-14 advantage.  Puerto Rico kept their concentration and managed to come close (17-18), but it was the Polish team that scored important points (17-23). Malwina Smarzek scored the last point with her serve: 18-25.

Puerto Rico took a six point margin going into the second obligatory break 16-10. Poland didn’t’ give in and diminished the margin to one point (22-21). Karina Ocasio scored the second matchpoint in favour of Puerto Rico: 25-22.

Ask the Olympians: Falling in love with...