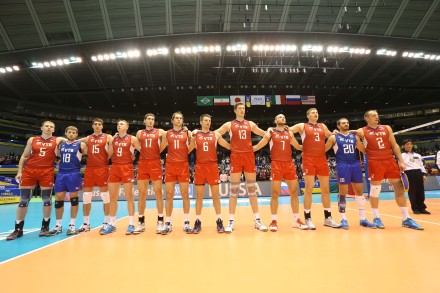 Emanuel Rego, the Brazilian Olympic champion in beach volleyball, said on the possibility of a Russian ban at the Rio Olympics: “It is a decision that has to be very well thought out and studied because there is much more innocent athletes than those doped. You cannot take an attitude without thinking of the innocent. It is a drastic decision that can punish good athletes that do not indulge in doping”.

Gilberto Amauri De Godoy Filho (Giba), the Brazilian Olympic champion in volleyball and the President of the FIVB Athletes’ Commission, said: “We have seen many Russian athletes in various sports being punished for doping. Prohibit Russia to compete in the Olympics will take much of the brightness of the competition, but it is necessary to consider curbing doping”.

Laura Ludwig, the German four-time European Champion in beach volleyball, said: “If the FIVB and the IOC are convinced that they are not involved with the state sponsored doping program then there is no need for them to be sanctioned for other disciplines’ wrong-doing.”

Julius Brink, the German Olympic Champion in beach volleyball, said: “The obviously state supported doping scheme at the Sochi Olympics shocked me but it does not make me think that all Russian athletes were/are doped and must be banned. To ban a whole nation from the Olympic Games will always hit those who are clean and punish them.”

Is this the sexiest volleyball player at the moment? Hello, Winifer Fernández! (VIDEO)