The world ranked 8th Argentina showed themselves well rested after the bitter defeat against Germany. The team which is already qualified for London won against Portugal in the Fraport Arena in Frankfurt by 3-0 (28-26, 25-20, 25-21). Argentina end the tournament in Frankfurt with two victories and one defeat, underdog Portugal is still without a victory and even without winning one set. In the 17th comparison of the two teams it was the 12th victory for Argentina. Top scorers were Facundo Conte(15) for Argentina and Filipe Pinto (15) for team Portugal. 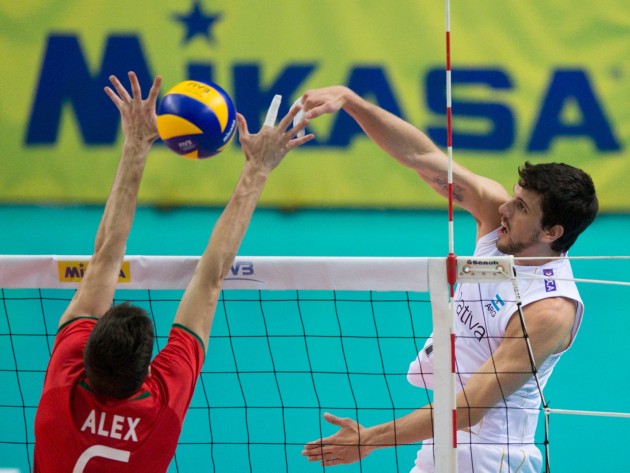 Now the Argentine Seniors’ coached by Javier Weber returns to the country to welcome the second weekend of the most important annual competition organized by the International Volleyball Federation (FIVB) after a stop due to Olympic Qualification tournaments still going on. Argentina will face at home in Almirante Brown (where last year the Youth’s Boys World Championship and this year’s South American Olympic Qualy took place) Germany, Bulgaria and Portugal on the second weekend of the Intercontinental new Formula Round.

Gabriel Arroyo played as start line-up player as only change with reference to the first two matches played in Frankfurt. With ups and downs but mostly Argentina leading the match with a good advantage, the only defeat suffered by the South American team on its first weekend was against the local team that became strong playing with the support of their fans.

After the good performance of Arroyo and Quiroga on the first set and Iván Castellani on the second Argentine grew along the sets winning confidence and putting the series 2-0 even though Portugal never stopped fighting.

On the third set, Javier Weber changed players with Pablo Crer from the start and Cristian Poglajen and Nicolás Bruno getting into the playing field from the bench to get a good difference at the first TTO 8-4 but Portugal wanted its first victoy and equalled at 17-17. With Conte and Quiroga again in the match, Argentina reacted to close it very quickly and return home.

Rodrigo Quiroga, Argentinean captain: “I’m happy because we won and finished this weekend with a new victory. For the next weekend at home we must fix our service, we were very good in attack and that was the reason that we win this game.”

Javier Weber, Argentinean coach: “It was a good victory, especially because we were very tired in this match. The team play very well in attack and that was the difference today between Portugal and our team. I’m very happy that we won this game. “

Violas Tiaga for injured Andre Lopes, Portuguese captain: “It was a little better than the last two matches and we had the ability to win one set today. We have to get a better imput in our work and then try to win.”

Flavio Gulinelli, Portuguese coach: “Congratulation to the Argentina team. Today we went up from the locker with the idea to win one set because from the last results it was realistic to win one. We have an inexperienced team but we were close to win a set. I cannot say that I’m satisfied but our aim is to improve from day to day and we got better here in Frankfurt from day to day. “