Time for another international competition with Argentine presence. With three reinforcements from the Seniors' Men Team, the Argentine Seniors leave this Friday early morning for Dominican Republic, the venue of the 7th Pan-American Cup for Seniors' Teams The Argentine team coached by Fabián Murano will work during this competition for their South American Championship, that will be held in the second part of the year, after the London Olympic Games 2012. 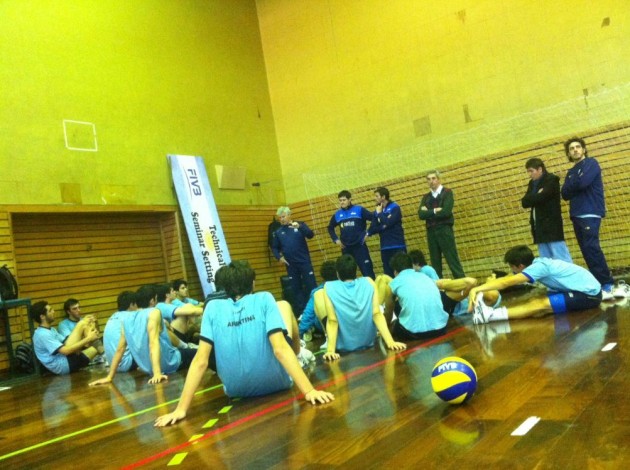 The team listening to the coaching team

After concentrating at Cenard facilities Muraco gave the final roster ending last week, having into account three of the Seniors. the setter Maximiliano Cavanna, the wing spiker Mariano Giustiniano and the middle player, Maximiliano Gauna, all of them having participated at the FIVB World League 2012 that ended last week for all 16 teams with only the best six playing now in Sofia, Bulgaria the Final Round.

The team, with most of the Youth‘s players that participated last year at the World Championship held in Argentina go on with the light blue – white jersey, now already thinking on a new World Championship, but in the year 2012, looking their qualification at the South American Championship in Colombia.

This event will take place July 9th – 15th with Argentina in Pool A facing the host team of Dominican Republic, Trinidad & Tobago and Canada on the first round. On Pool B stand Brazil, USA and Mexico.

ARG: Course in Regatas Corrientes in charge of Julian Alvarez

ARG: Rolando Cholakian, one of the Argentine...