The year 2012 was an Olympic year, where the Brazilian men's volleyball carried a great responsibility. The team worked hard, and dedicated, but in the end, Russia won out and won by 3 sets to 2. Throughout the Olympic cycle, several players were called and evaluated by coach Bernardinho. 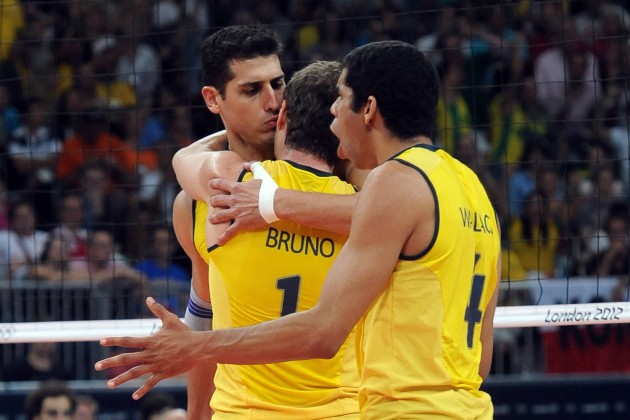 Throughout the Olympic cycle, several players were called and evaluated by coach Bernardinho. Only in 2012, 20 players trained in Aryzão, the Centre for Development of Volleyball in Saquarema (RJ): Bruno, Ricardinho, Leandro Vissotto, Wallace, Lucão, Sidão, Rodrigão, Giba, Dante, Murilo, Thiago, Alves, and Serginho.

Brazil has opened in London with victory by 3 sets to 0 on Tunisia. In response, Russia won by the same score. Then, still in the qualifying stage, suffered their first defeat by the United States 3-1. The Brazilian team won again when passing through Serbia by 3 sets to 2 and ended the first round with a 3-0 victory against Germany.

In the quarterfinals, Brazil eliminated Argentina by 3 sets to 0 and went to the semifinals when they beat Italy by the same score. In the other semi, Russia got the better of Bulgaria by 3-1.

In the big match, Brazilians took on Russians. Russia won 3 sets to 2 and got the gold medal. Brazil won silver and Italy got the third bronze.

After the London Olympics, the captain Giba announced the retirement from the Brazilian team.

Before the Olympics, Brazil played in the World League, which served as a strong preparation for the Olympics.

The 2012 World League was won by Poland, who won the title for the first time in history. The United States stood with the silver medal and Cuba finished third. Bulgaria was the fourth place, followed by Germany, and Brazil took sixth.