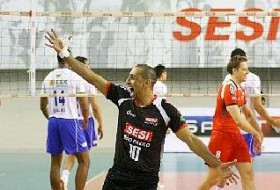 Serginho bet on a difficult game for both sides

If the team of São Bernardo will be in an unfavorable position, the technician Rubens has the advantage of knowing some of the sportsmen who will be at the net.

Murilo, Sidão, Rodrigão, Serginho and Wallace are the players of the Brazilian team, where Rubinho is the assistant coach.

The fact of living and being familiar with the playing characteristics of these spotsmen helps.

But Rubens notes that both teams know each other well.

“We’ve played games for the Championship, when they were not with the players of selection, but the base is the same. The teams have meet before and it has two sides. It makes it easy for our team but it makes it easy for them also, ” said Barrichello.

“Serginho is the first rank player in the world. In whichever team he plays, or in any selection, it does make no difference. We must try to make him not interfere much in the game, but we know that it is very difficult. He is the player who is always positive for the team,” Barrichello said.

Serginho bets on a tough match

Serginho also knows the coach will be his opponent in the next round of the Superleague.

Therefore, for a reason it provides difficulties.

“Facing the BMG / São Bernardo is not easy. They have a young team and it has a very good coach, who can work well with the kids, ” praises Serginho.

The expectation of the libero of Sesi-SP, of the Brazilian selection is justified because of the results in the tournament.

In the heat of the day, December 20, despite playing in on the opponent’s court, BMG / São Bernardo won with 3:1in sets.

This time, Serginho hopes to change the result.

“We know they have a dangerous team, especially the physical power of the players. Technically, they still have to grow, but playing with a big team can make the game difficult. In fact, I believe this will be a tricky game for both sides,” Serginho bet.

Brazil: SuperLiga MALE – The round will be completed on Wednesday

LIVE FROM MILANO: Whistles from the stands...