BRA M: No matches in “Maracanãzinho” at 2016 Olympics?

This weekend, the governor of Rio de Janeiro Sergio Cabral, announced that the reconstruction, that should take place in the “Maracanã complex”, did not happen so far, and this decision may impact the volleyball competition in the 2016 Olympic Games in that Brazilian city. 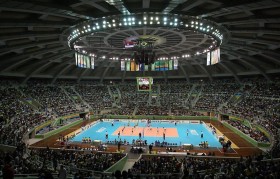 According to the project delivered to the International Olympic Committee (IOC), the gymnasium “Gilberto Cardoso Maracanãzinho”, will stage the volleyball matches at the Games. However, for that it would require some adaptations, such as building two blocks of heating.

According to the original design, the blocks would be lifted at the location of the school that the governor announced to be demolished. Beside the blocks, it would be needed to adjust the central court and reshape the internal and external areas of the gymnasium.

Until today, there has been no official announcement, nor from the governor, nor from the IOC, on the situation. The press was only informed that there will be future meetings to discuss the issue.

To read more news from this country, click on Brazil.