BRA M: Otavio of Vivo / Minas best player in second round of semifinals

In the second round of the semifinals of the Super league 11/12 the best performance showed the center Otavio of Vivo / Minas Gerais (MG). 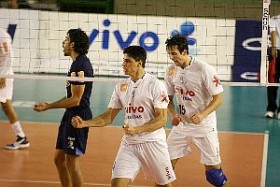 Despite the lost match against Sada Cruizeiro (MG) with 3:0, which caused the elimination of the team, Otavio was elected the best player in block, the third in service, the fourth in defense and the fifth in attack.

With the victory over Vivo / Minas, Sada Cruzeiro secured the place in the finals. The highlights of Sada Cruzeiro were: the center Douglas Cordeiro as the best player in attack, William Arjona the best setter and Filipe the best receiver.

In the other semifinal match, Volei Futuro (SP) defeated RJX (RJ) with 3:1. The opposite Lorena scored 23 points in this match and was elected the best scorer of the round. Mario Jr. was the best in defense and the best libero. The center of RJX, Lucao showed the best performance in service.