Britain's volleyball equivalent of the Jamaican bobsleigh team are showing ingenuity and guts to pursue their dream. By Sue Mott. 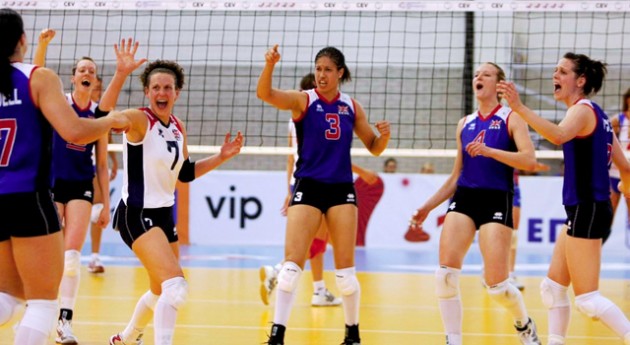 When the Great Britain women’s volleyball team enter the arena at Earls Court to compete as Olympians at London 2012, it will mark the culmination of an obstacle course of such staggering proportions, they should be sponsored by royalties from The Sound of Music. Climb Every Mountain has been their unofficial motto since their formation in 2007.

In brief, they have been stripped of their funding, left without a training base and are scattered to all parts of the world in an effort to keep playing volleyball over the winter. They have ripped up their home lives, leaving families, mortgages, jobs and partners to play their sport full-time from California to southern Italy, from Germany and Belgium to Switzerland and Spain. Well, so did Carlos Tevez. But not for €500 (£427) a month (as in the case of the 22-year-old Laura Beardsmore, at Olympic Florange in Terville, eastern France, who with five A grades at A-level was confidently expected by her slightly bemused parents to go to Oxford or Cambridge instead).

Their story is one of unlikelihood and guts, with echoes of the famous Jamaican bobsleigh team at the 1988 Calgary Games. No one expected a tropical island to field a team on the ice, but they did and became folk heroes. Hollywood made a film about them and a measure of their legacy is that Jamaica has a Winter Olympic bobsleigh team to this day.

“And that’s what we want,” GB’s head coach, Audrey Cooper, told the Observer. “Not just to turn up to claim the T-shirt, but to perform so well that we inspire the next generation to take this spectacular sport seriously, and the next, and the next. These girls have the ambition of laying the foundation of the future of British women’s volleyball.“

Lesser characters with no money, no home and not even the certainty of being allowed to take their host-nation place at an Olympics, as was the case last summer, might have packed up their kit bags and gone away. Seventeen of the squad climbed on their bikes instead, embarking on a 320-mile ride to raise their profile and donations to help stay in existence. Their statistician, Matt Bianco, fell in a ditch, otherwise all survived unharmed and more determined than ever.

Their unwavering perseverance was almost certainly one of the factors that persuaded the British Olympic Association to announce at the end of last year that they would allow them to compete in London. As a consequence, the BOA also suggested that the government funding agency, UK Sport, might like to increase their funding to volleyball.

But UK Sport, who had originally allocated approximately £4m in total to indoor, beach and Paralympic volleyball over four years to 2013 – less than half the figure for basketball and six times less than rowing – did not feel the need to budge. The women soon became aware they will have to raise, by their own ingenuity and hard work, the £250,000 they need to regroup in the summer and play meaningful matches.

In the short term, they are becoming better players by whatever means available. Grace Carter, a six-footer who can spike (forehand smash to the uninitiated) the ball from a height of 10 feet, is with Beardsmore at Terville, where her French GSCE is not entirely useful. “Being able to name my sisters and my nonexistent pets was not very helpful when I needed a new inner tube for my bike,” she says. Lizzie Reid, a 21-year-old Londoner with 58 caps, is playing for the University of Georgia in the United States. “I miss fish and chips but at least we’ve got cheerleaders.“

The captain, Lynne Beattie, a pharmacist from Glasgow, has been astonished to find how deeply ingrained is the passion for volleyball at her club in the little village of San Vito dei Normanni, near Brindisi in south-east Italy. “We’re treated like royalty. At our first match of the season we were greeted by huge crowds offering us gifts and flowers. Over a hundred people come to watch us train. On my flatmate’s birthday, the club sent a member of staff around with a beautiful single red rose.”

Worldwide, volleyball is big. The governing body, the FIVB, claim that, with 220 affiliated countries, they are the largest international sporting federation in the world. The women’s semi-final between China and Cuba at the Beijing Olympics commanded a greater global TV audience (450 million) than the men’s 100 metres final (390 million). Top players in Europe command million-euro salaries and probably entire rose gardens on their birthdays.

That is not quite the current experience of Rachel Laybourne. Until recently the 28?year-old, who has been capped 67 times, was working at a call centre in Rotherham for £6 an hour. “On New Year’s Eve I discovered that I need reconstructive surgery on my shoulder, which might take six months to heal, and then I had to rush my boyfriend into A&E with a temperature of 40C. But of course I’ll carry on. We had the devastation of our funding being cut but came back from that. These are just hurdles. We’ll get there.“

Not without a struggle, but they know that. The original removal of their funding was one more obstacle, not a death-knell. At the time, in discussion with UK Sport, the British Volleyball Federation board felt they had no option but to support their best-performing teams, which meant no more money for the women. Looking at the bald statistics, the women’s team lost every match they played last summer.

“But that’s not the whole story. Particularly at the European Championships, we played outstanding volleyball,” Cooper says. “We only started four years ago and we’re developing fast as a team. We went so, so close last summer to beating the Japanese, who were third at the last world championships. Arie Selinger, regarded as one of the best volleyball coaches of all time, said our improvement had been spectacular. I have never presented the girls with easy opposition. I want them to be mentally tough. This isn’t about winning in 2010, it’s about the fighting unit we will have become by 2012.“

Nicky Osbourne, 71 caps, a 26-year-old Oxford graduate, transferred from Bristol University to Sheffield midway through a medical degree for the chance to be part of the British team. “You’d just kick yourself forever if you missed an opportunity to play for your country at a home Games. It’s not about money, it’s not about fame. It’s about playing for each other and the sport we love. And if we can inspire young people to see how athletic, dynamic and fun volleyball can be, that would be absolutely massive to us. Our Olympic gold medal is being the best we can be.”

BRA M: Otavio of Vivo / Minas best player in second round of semifinals