Fabiana, currently one of the best Brazilian players, experienced an outrageous incident during yesterday’s match between her Sesi-SP and home team Camponesa/Minas Tênis Clube! 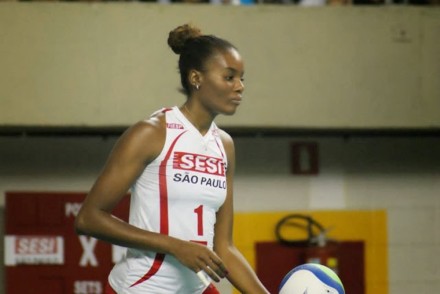 One of the fans – if he could be called that – fired racial slurs towards the Brazilian Olympic champion. And he did it in Belo Horizonte, the city where she was born.

“This experience is difficult and hard! To experience it in my country, it makes it even worse! Yesterday during the game against Minas, a man fired a machine gun of racial insults towards me. It was either ‘monkey wants banana’ or ‘monkey plays with banana’, among the other offenses. This kind of ignorance hit me especially because my family was watching the match. He was promptly removed from the hall by the decision of Minas and sent to the police station. I appreciate the attitude of Minas… the club where I began my story and where, even today, I have loved ones,” Fabiana wrote on Facebook. 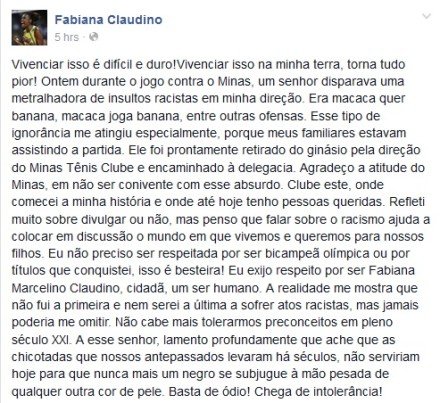 “…I think that talking about racism helps to put in discussion the world we live in and in which we want to raise our children. I don’t need to be respected for being Olympic twice champion or for the titles I won, that’s bull***t! I demand respect for being Fabiana Claudino Marcelino, a citizen, a human being. Reality shows me that I wasn’t the first nor will be the last to suffer racist acts, but I can’t ignore it. The prejudices in the twenty-first century shouldn’t be tolerated any more… No more hate! Enough with intolerance!” added middle blocker.

‘I don’t need to be respected for being Olympic twice champion or for the titles I won, that’s bull***t! I demand respect for being Fabiana Claudino Marcelino, a citizen, a human being.’ – The Brazilian Captain.

I just can’t believe that someone in BRAZIL fired racial slurs toward Fabiana. She is a female volleyball player, i don’t understand…