The young Brazil team was unstoppable as they dominated Venezuela to add another victory in three sets (25-20, 25-15 and 25-16) in a match of Pool B of the VII Men’s Pan American Cup. 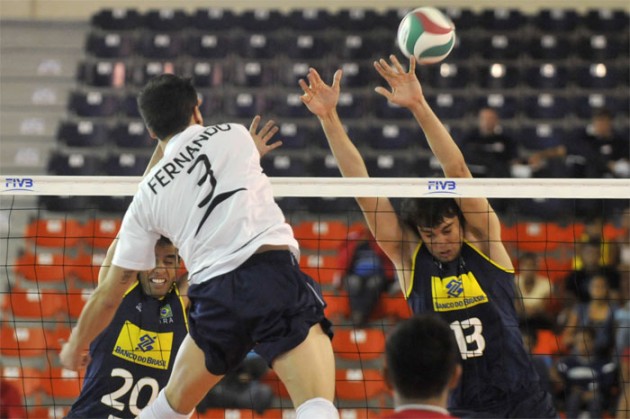 The top scorer of the clash was Brazilian Cargnin Franco, who contributed 12 points, followed by Tiago Barth with 10 while all their players had the chance to participate. Venezuela’s Luis Arias and Kervin Piñerua finished with 8 tallies.

There was a fairly competition in attacks with a 33-32 difference for the winners, but didn’t surprise that the taller Brazilians dominated 9-2 in blocks and also 4-2 in serves. Brazil made 15 errors to 29 by Venezuela.

Brazil’s coach Leonardo Carvalho said: “My team is seeking for consistency as we only had a week of training together and to play five or six matches in a row is difficult when your men are not ready yet for that challenge. So I’m happy with the victory because we have a big match tomorrow.“

Cuban Roberto Garcia, coach of Venezuela, agreed on that it is very difficult to maintain a level of play in various tournaments and the team is not playing as good as when participated in the Pre-Olympic World and South American tournaments.

“But it is not a matter of physical preparation or technical-tactical but psychological, and our players have not been able to face two rivals like USA and Brazil in two straight days.”

Brazil’s captain Raphael Vieira de Oliveira, admitted it was a difficult match. “We are not in our best shape, but every game is an obligation to meet our goal, and hope we can do well tomorrow since it would be an important step to dominate a team like United States.“

Meanwhile, Venezuela’s captain Kervin Piñerua lamented that his team has not performed at its best in these two preliminary contests, “but tomorrow we will have to battle with Mexico. It is crucial to get a victory for a better place in pool B. I think we need to restore our confidence in our true potential.“

NORCECA M: Coaches of seven countries are enthusiastic about chances