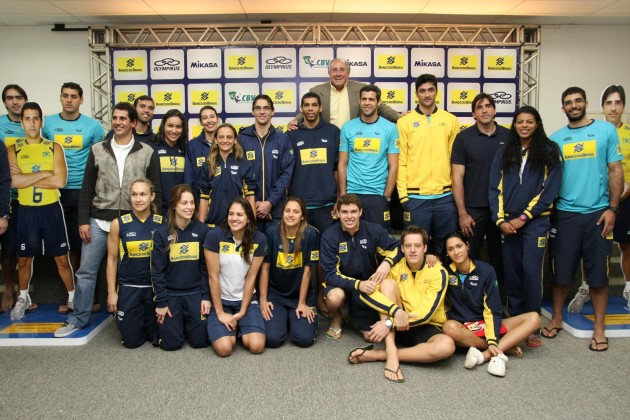 A member of the winning teams in Barcelona 1992 and Athens 2004, Giovane was keen to share the honour with all the other members of those two squads. “In volleyball, I cannot speak only about myself,” he said. “It is always about the team, and all of them played their part in everything we won. It is a big satisfaction for me.”

Mauricio, who was also there in Barcelona and Athens, took advantage of the opportunity to say good luck to the departing Brazilian men’s and women’s teams for this year’s Olympics, who were watching the ceremony. “You are my biggest idols now,” said the former setter. “Brazil will be cheering for you. We believe in the two teams. I have been through some hard moments, and I know that is possible to overcome it.”

Brazilian Federation president and FIVB executive vice-president Dr Ary Graca reinforced the importance of honouring the legendary players of the sport. “I am really proud and satisfied to make this tribute,” he said. “We are here to say thank you to both of you on behalf of the whole country.”

“Unfortunately, Brazil is not used to honouring the ones who make us proud and fight for us. The past is always essential for the future.” Dr Graca also promised to provide new totems if any other player wins their second Olympic gold medal in London. “If we have new champions, they will have their totems here in Aryzao as well,” he said. “I will be very glad to see the garden all filled with their images!”