In this exciting Bundesliga game, Allianz MTV Stuttgart defeated SC Potsdam 3:2 to stay close to the playoffs. Silvana Olivera was the MVP, Alessandra Jovy-Heuser had 23 with 8 blocks, Deborah van Daelen had 22. 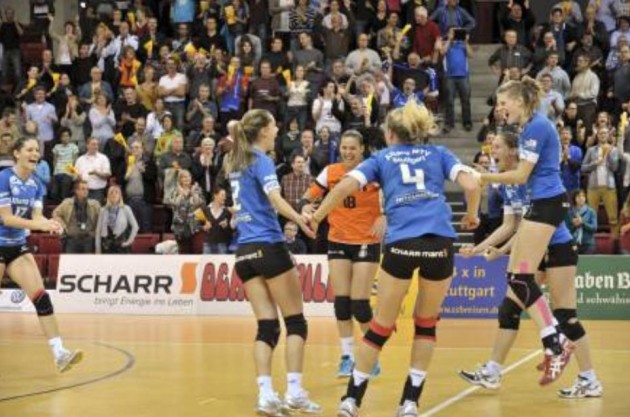 In the first set Stuttgart started well and won it with no major problems 25:21. After that Potsdam took over to win the second and tie the game 23:25.

After a ten minute break, both teams started motivated in the third. Jan Lindenmair‘s team wanted a spot in the playoffs, and Potsdam was chasing sixth place. The guests were better in the finish and won 25:27.

With the supporters being their seventh man, Stuttgart had a lightning start in the fourth 8:1 on the first technical time-out. It was like that throughout the set and they won 25:12.

Stuttgart kept their game in the tie break and was leading 5:1 and 10:2. It was easy for them to finish the game after that 15:7.

Silvana Olivera was the MVP, Alessandra Jovy-Heuser had 23 with 8 blocks, Deborah van Daelen had 22.