GER: After many ups and downs Friederike Thieme is still in love with Volleyball

After ending its campaign in the 2012 CEV Volleyball Champions League by losing twice to Russia’s Dinamo KAZAN, Germany’s DRESDNER SC recently finished atop of the charts the regular season in the Bundesliga. 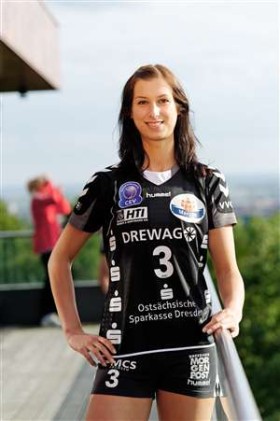 While the team has been achieving such prestigious results, outside hitter Friederike Thieme is trying to recover after being out for a long time, first because of an illness and afterwards sidelined by an injury.

This was actually supposed to be a very successful season for Thieme after she had finished her apprenticeship to become an office clerk as one of the best students from her group. However, even though the intention was to devote most of her time to Volleyball, she was out for a few weeks right after the start of the season and then the doctors diagnosed a stress fracture of her left metatarsus in late January, so she is still fighting to complete her own comeback. The rehab keeps her busy almost all day long. “I still feel some pain and I can’t help my team out there on the court, which is even worse” she says.