Jenia Grebennikov is currently two weeks in Germany where he will resume the championship, this Thursday against Coburg. For our site, the libero of the Blues and Friedrichshafen talks about World Championship, goals with his club and the position of volleyball in Germany. Interview. 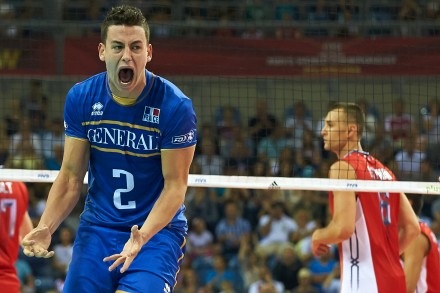 Was it difficult for you to get back in training with Friedrichshafen after the great adventure at the World Championship?

„Yes, it was difficult. I still have the World Championships in mind, but since we have a new team, I wanted to show that thay could rely on me this year and now I’m back“.

Have your club teammates mentioned your reward ’best libero’ at the World Championship?

„I got spoof by the Germans (laughs). Just Sunday at the team presentation, Max Günthör, gave me a little wink and congratulated me for the bronze! So we were just laughing. When I miss a reception in training or a player puts me an ace, he said to me ’I put an ace at the best libero in the world’!“

Berlin dominated the German championship in three years. Can Friedrichshafen stop this hegemony?

„That is the goal. Last year we won the Cup, but the leaders are determined to collect the championship. Berlin is really strong, but the president told us that we absolutely must win it this year. We would also like to pass the first round in the Champions League (Friedrichshafen is in Pool D with Kazan, Posojilnica and Olympiakos).“

Personally, you will start your second season there, but your goal is to go the Russian league…

„Yes, it is a dream, especially if I can play with my father (Boris Grebennikov leads Surgut), but it will be very difficult because of the limitation of the number of foreigners in clubs there. Get the Russian league as libero, it’s really complicated. But I will try. I am already very happy that my father was able to go. On my departure from Rennes I also had some proposals but no ona was straightforward.“

I also want many things but can it be done?! Do they have the team for title? Berlin is also strong this year, and they have good winning streak…