Germany returned to the Olympic Games for the first time in 32 years in Beijing 2008 and the side will be looking to return once again, this time to London. 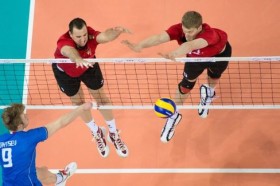 Standing in their way are India, Cuba and the Czech Republic and they will have to beat all three at the FIVB Men´s World Olympic Qualification Tournament in Berlin this weekend to earn a berth.

The tournament’s structure is similar to the 2008 qualification tournament in Düsseldorf.

Then, Germany beat underdogs Chinese Taipei and then Cuba and Spain in a dramatic five-set long fight.

Above all, the match against Cuba promises excitement: While six or seven players will be part of the German squad who participated at the Olympic Qualification in 2008, only four players will be part of the Cuban squad. Wilfredo Leon who was in the team as a 14-year-old in Düsseldorf, Lian Estrada, Keibel Gutierrez and Yenry Bell as well as Coach Orlando Samules Blackwood will be out for revenge.

The match against the Czech Republic is also a special game from the German point of view as the Czech Head Coach is Steward Bernard. The 46-year-old Dutchmen worked for the German Volleyball Federation from 2003 to 2012: He was Assistant Coach in 2008 and led the German men to the victory at the Olympic qualification tournament as interim coach.