As they are returning to Europe’s most elitist club competition, the CEV Volleyball Champions League, after seven years the BERLIN Recycling Volleys have embarked on an ambitious project to join forces with other team sports that are active in Germany’s capital city. 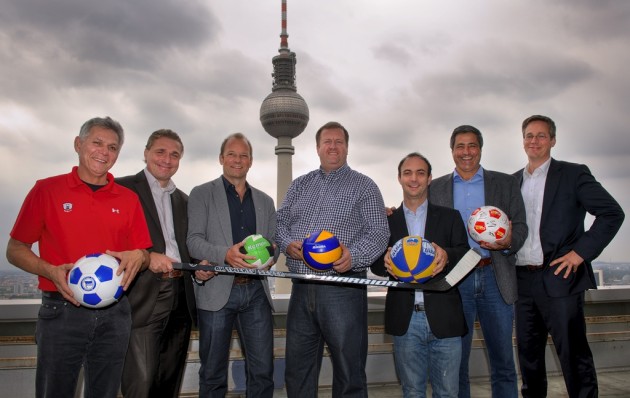 Managers of the top six professional sports clubs based in Berlin

The side from Berlin got the right to compete in the 2013 CEV Volleyball Champions League after claiming the Championship series in the Bundesliga at the end of five thrilling matches played this past April against Generali UNTERHACHING. The participation in the Champions League is certainly adding some flavor to the activities of the club as well as going to attract some Volleyball fans to Germany’s capital city. Berlin plays host to numerous sports events all the year around and is home to several clubs competing in the first or second division of the respective national leagues. Still, together with the BERLIN Recycling Volleys, the major sports attractions in Berlin are certainly two soccer clubs, Hertha BSC and 1. FC Union, basketball powerhouse Alba Berlin, the ice hockey stars of Eisbären Berlin and handball team Füchse Berlin. All these clubs have been closely cooperating together since February 2010 thereby creating a marketing platform that is known as “Sportmetropole Berlin”.

These organizations recently reinforced their ties by establishing a community of interests under the name “Initiative Berliner Proficlubs” specifically conceived for professional sports and to raise public and media awareness around their respective activities.

“This is a great step for professional sport in Berlin and our major goal remains to sustainably raise the profile and status of professional sports here in Germany’s capital city” says the club President of BERLIN Recycling Volleys, Kaweh Niroomand. “We also strive to strengthen our dialogue and cooperation with the political, economic and social authorities of our city”.